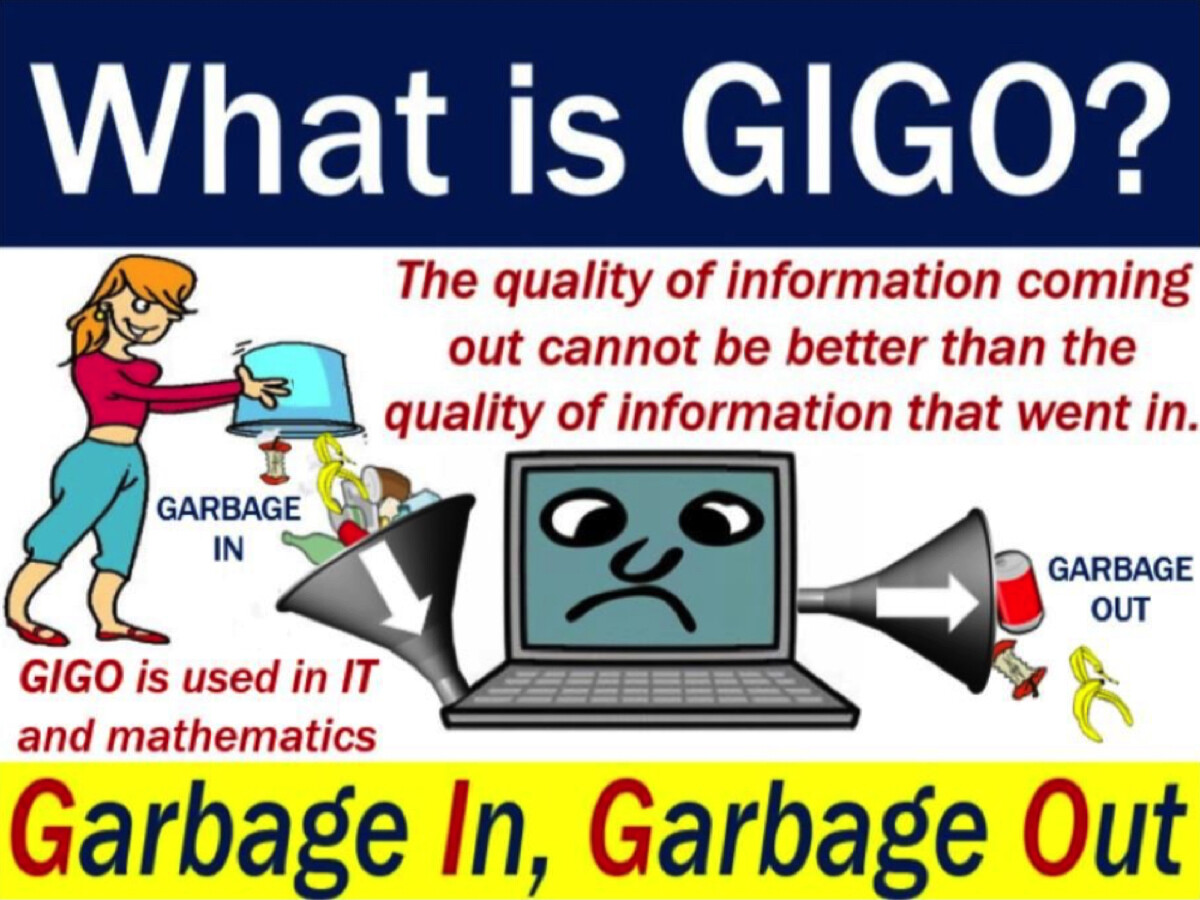 What is GIGO (garbage in, garbage out)?

Two SITREPs, the first from The Institute for the Study of War, which advocates a Unipolar world, the second from The Vineyard of the Saker, who advocates a Multipolar World. 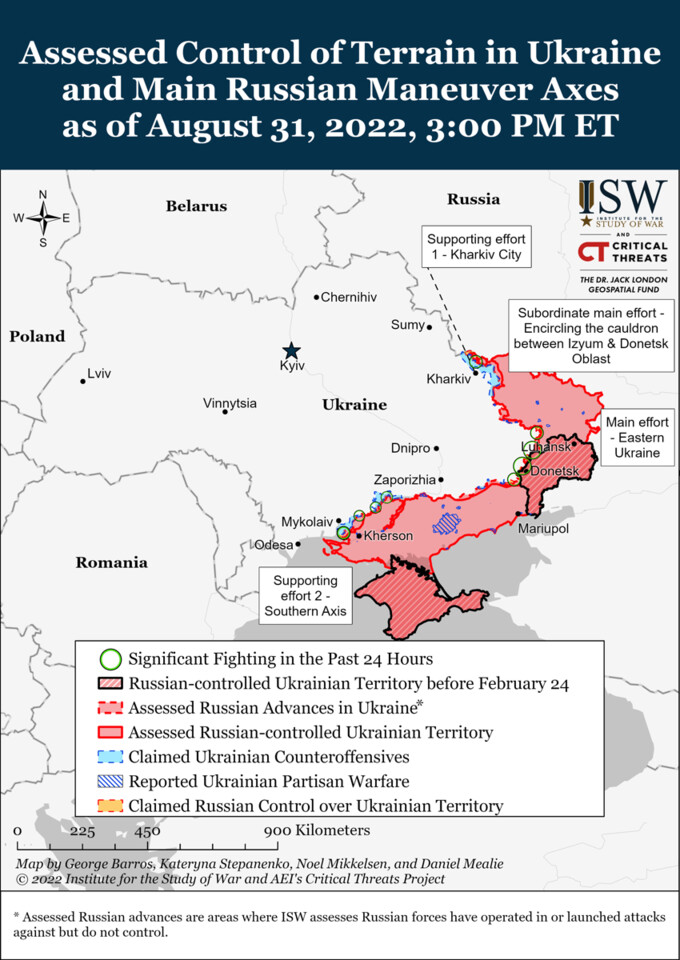 Click here to see ISW's interactive map of the Russian invasion of Ukraine. This map is updated daily alongside the static maps present in this report.

Ukrainians and the West should not fall for Russian information operations portraying the Ukrainian counteroffensive in Kherson Oblast as having failed almost instantly or that depict Ukraine as a helpless puppet of Western masters for launching it at this time. The Russian Ministry of Defense began conducting an information operation to present Ukraine’s counteroffensive as decisively failed almost as soon as it was announced on August 29. Several prominent military bloggers—even bloggers who have historically been critical of the Kremlin—are promoting this message. Other milbloggers are additionally promoting the narrative that Ukraine’s Western handlers pushed Ukraine to launch the counteroffensive prematurely and/or too late for “political” reasons and because the West expected a counteroffensive. Kremlin media outlets have also centrally amplified allegations of civil-military conflict between Ukrainian President Volodymyr Zelensky and Ukrainian Commander-in-Chief Valerii Zaluzhnyi to bolster the narrative that Zelensky sought to conduct a counteroffensive for inappropriate political reasons whereas Zaluzhnyi assessed Ukrainian forces were not militarily prepared to do so.

Military operations on the scale of this counteroffensive do not succeed or fail in a day or a week. Ukrainian officials have long acknowledged that they do not have the sheer mass of mechanized forces that would have been needed to conduct a blitzkrieg-like drive to destroy the Russian defenses in Kherson Oblast or anywhere. They have instead been setting conditions for months by attacking and disrupting Russian ground lines of communication (GLOCs), Russian command and control, and Russian logistics systems throughout southwestern occupied Ukraine. The timing of the start of the counteroffensive is consistent with the observed degradation of Russian capabilities in western Kherson Oblast balanced against the need to start liberating occupied Ukrainian lands and people as soon as possible. There is no reason to suspect that the timing has been materially influenced by inappropriate considerations or tensions. Counteroffensive operations now underway will very likely unfold over the coming weeks and possibly months as Ukrainian forces take advantage of the conditions they have set to defeat particular sectors of the line they have identified as vulnerable while working to retake their cities and towns without destroying them in the process.

Military forces that must conduct offensive operations without the numerical advantages normally required for success in such operations often rely on misdirections and feints to draw the defender away from the sectors of the line on which breakthrough and exploitation efforts will focus. The art of such feints is two-fold. First, they must be conducted with sufficient force to be believable. Since they are feints, however, rather than deliberate attacks expected to succeed, they often look like failures—the attacking units will fall back when they feel they have persuaded the defender of their seriousness. Second, they take time to have an effect. When the purpose of the feint is to draw the defender’s forces away from the intended breakthrough sectors, the attacker must wait until the defender has actually moved forces. There will thus likely be a delay between the initial feint operations and the start of decisive operations. The situation during that delay may well look like the attack has failed.

ISW and other analysts studying this war have been appropriately cautious and circumspect in announcing the culmination or defeat of major Russian offensive operations.  ISW will apply the same caution and circumspection to assessing the progress of the Ukrainian counteroffensive and exhorts others to do the same.

Russian authorities released a list of the locations of schools in occupied areas, including precise coordinates, ostensibly warning of possible Ukrainian attacks against them as the school year begins on September 1.  This announcement could be preparation for Russian false-flag attacks on schools, for an explanation of very low attendance, or for some other purpose. The Russian Defense Ministry (MoD) issued a statement on August 31 warning that Ukrainian forces are preparing to shell schools in occupied Donetsk, Luhansk, Kharkiv, Kherson, and Zaporizhia oblasts. The Russian MoD released a list of the addresses and exact locations of all schools in occupied areas of Ukraine under the pretext of “ensuring the safety of students and teachers.” This statement, along with the list of schools in occupied areas, could be an attempt to set information conditions for three potential courses of action on September 1. The first, and most dangerous, may be a preparation for Russian troops to stage a false-flag attack against educational infrastructure in occupied areas of Ukraine and blame the Ukrainian armed forces for the attack. The second scenario, which is more likely, is that Russian authorities may be setting conditions to explain very low enrollment and attendance in Russian-run schools as the school year begins. As ISW reported on August 30, Ukrainian families with children have been increasingly leaving Russian-occupied areas of Ukraine as the school year approaches. Russian authorities may seek to amplify the claimed threat of Ukrainian strikes against schools in order to explain low attendance levels. The third scenario is that Russian authorities could be attempting to establish a published no-strike list by identifying specific civilian infrastructure, which will later allow them to use the identified schools as military bases with the expectation that Ukrainian forces will not target designated civilian infrastructure.

Russian authorities are additionally using the start of the new school year to escalate efforts to institutionalize the elimination of Ukrainian identity. Russian authorities continued to disseminate Russian educational materials in schools in occupied areas of Ukraine. Russian-backed authorities from Sevastopol arrived in Starobilsk, Luhansk Oblast, to deliver backpacks and official state symbols of the Russian Federation to local schools. The Russian-appointed head of Crimea, Sergey Aksyonov, similarly called on educators in Crimea to intensify patriotic programming in Crimean schools, notably to teach children about Russian President Vladimir Putin’s decision to conduct a “special military operation” in Ukraine. Ukrainian outlet Strana reported that the first lesson that will be taught in schools in occupied Donetsk and Luhansk oblasts is oriented on a lesson outline that pulls from Putin’s article on “The Historical Unity of Russians and Ukrainians”, his speeches on the recognition of the Donetsk and Luhansk People’s Republics (DNR and LNR), and the commencement of the "special military operation.” In these speeches, Putin rejected the legitimacy of Ukrainian identity, declaring that it “is entirely the product of the Soviet era... shaped on the lands of historical Russia.” He also repeatedly declared that Ukraine is part of Russia and cannot be a state in its own right. The explicit link between Russian-imposed curricula in Ukrainian schools and these speeches and writings is part of an effort to erase the Ukrainian identity in Russian-occupied parts of Ukraine through educational control.

The G7 Non-Proliferation Directors Group stated that Russian attempts to disconnect the Zaporizhzhia Nuclear Power Plant (ZNPP) would be “unacceptable,” ahead of the International Atomic Energy Agency (IAEA) delegation’s visit to the plant. The G7 Non-Proliferation Directors Group noted that the ZNPP should not be used for military activities or the storage of military material. Satellite imagery provided by Maxar previously showed Russian combat vehicles sheltering under the ZNPP infrastructure very close to a reactor vessel.

Russian and Ukrainian sources again exchanged accusations of shelling and loitering munition strikes on Enerhodar on August 31. Kremlin-sponsored sources claimed that Ukrainian forces conducted an unmanned aerial vehicle (UAV) strike on the Enerhodar City Council building, and Ukrainian officials stated that Russian forces shelled the building in an effort to frame Ukrainian forces ahead of the IAEA visit.

Tons of thanks, a SMO update and some beautiful week-end music! 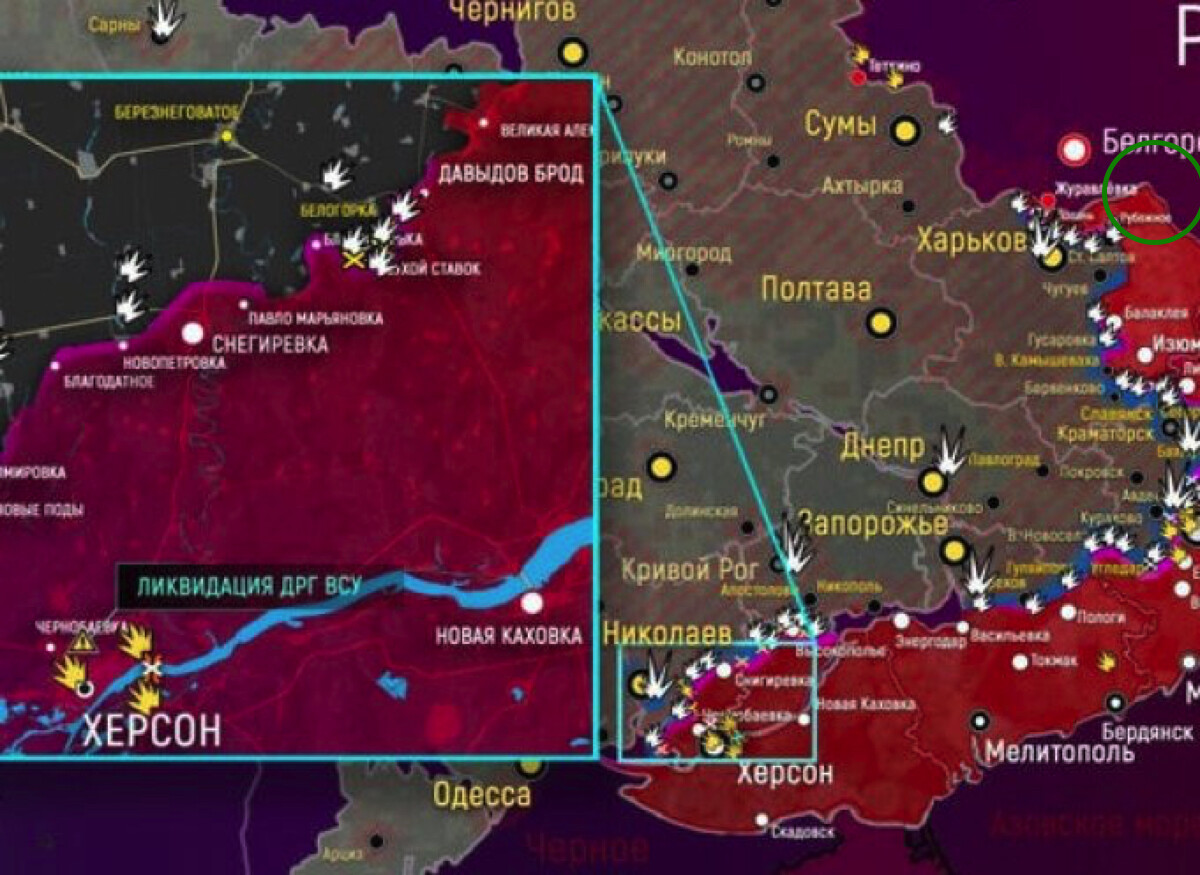 First, my deepest gratitude to you all!

I want to begin today’s report by thanking all those of you who have reached out to help me and the blog.  In spite of the hard economic times, many of you have sent donations, offered to volunteer and, last but not least, said prayers for me.  Of course, your donations will help financially, but it is your moral support which most deeply touched me and which give me the courage and determination to keep on fighting this fight, in spite of the apparent futility of taking on an entire obscenely rich and powerful ruling classes which waging merciless warfare on all of mankind.  I wish I could thank each and every one of you personally, but I simply don’t have the material time to do so, so all I can do is thank you all here for your unwavering and kind support!  You are truly the best community any person can hope to have!

Now let’s turn to the latest news next.

The Ukrainian so-called “counter-offensive” in the south:

The biggest news out of the Ukraine is the failure if the much announced Ukrainian “counter-offensive”.  Here are the latest reports from the Russian MoD: (emphasis added)

The enemy suffered losses and was pushed back from Olginka, Thorn Ponds and Arkhangelsk.
A battalion of the 57th Motorized Infantry Brigade of the Armed Forces of Ukraine was defeatednear the settlement of Sukhoi Stavki. Currently, the destruction of its remains is being completed.
To unblock the AFU units, 12 tanks supplied to the Kiev regime by Poland were transported across the Ingulets River. Some of the tanks were destroyed by the powerful fire action of the Russian troops. Several tanks were blown up in their minefield during a disorderly withdrawal. Only five Ukrainian tanks were able to break back, deep into the territory controlled by the AFU. During two days of unsuccessful attacks on Mykolaiv-Krivoy Rog and other directions, Ukrainian troops lost four combat aircraft: two Su-25, one Su-24 and one MiG-29. Three Ukrainian Mi-8 helicopters were shot down in the air. Russian troops also destroyed 63 Ukrainian tanks, 59 infantry fighting vehicles, 48 other armored combat vehicles, 14 pickups with heavy machine guns and more than 1,700 Ukrainian servicemen.

But this does not tell the full story.  1’700 KIAs might not sound like much, but in reality this is a huge deal for the following reasons:

Also, 1’700 KIA in one single maneuver is the biggest defeat for the Nazis since 2014, even bigger than the Ilovaisk “cauldron”!

I noticed with absolute dismay that, apparently, the Ukrainians tried one more time.  The result? Another  350 personnel, 31 tanks, 22 infantry fighting vehicles, 18 of other types of armored vehicles, eight armed pickup trucks, and 17 of other types of military vehicles destroyed by Russian artillery and airpower.

And today (Thursday) there are report that the Ukrainians tried to seize control of the ZNP.  First they fired over 100 artillery shells.  Then 2 diversionary groups totaling 60 soldiers on two crafts landed near the ZNP.  They were detected and destroyed by the Russian aviation.  Two hours later, the Ukrainians used two barges carrying an entire battalion (200-300 soldiers).  They were detected and sunk.