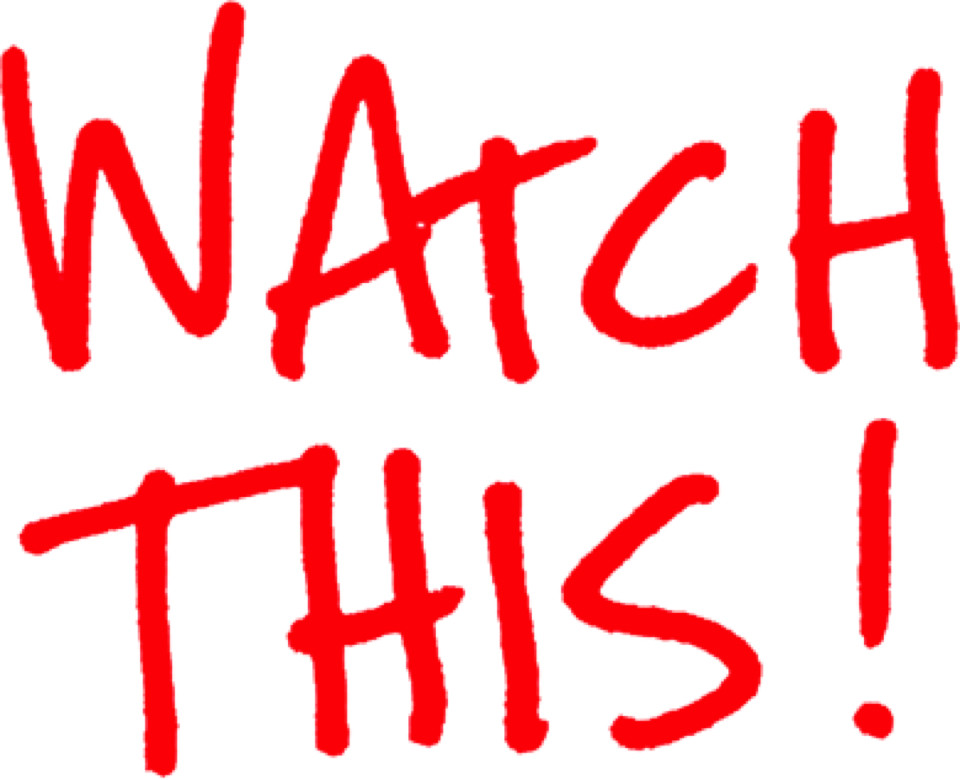 There are times in my career as a collapse observer and systematizer when my running commentary can quite reasonably be pared down to just two words: “Watch this!”

The current severe stage of the financial and economic collapse sequence that was initiated in 2008, which is being artificially masked (no pun intended) by the fake Covid “pandemic,” and now a hung and fraudulent US election on top of it is just such an occasion: why not just sit back and watch the world burn? 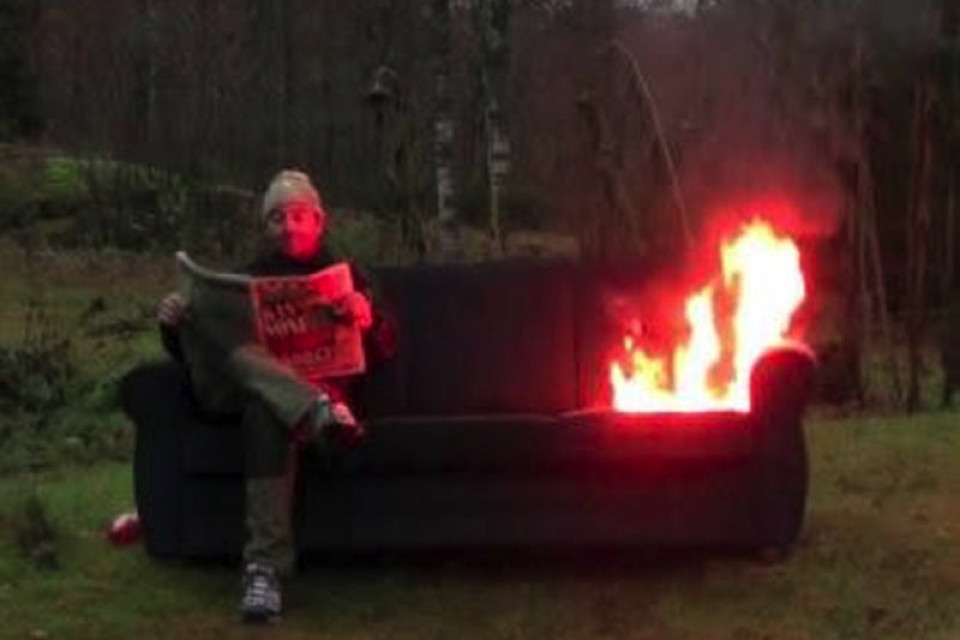 Let’s start with a quick jaunt down memory lane. I first realized that the USA was going to follow the general trajectory of the USSR back in 1995. I also immediately realized that the USSR was rather well prepared for collapse whereas the USA was about to be blindsided by it, and so, as a public service, I thought I should warn people. “And a fat lot of good that did!” some of you might immediately exclaim. But you would be wrong: lots of people have written to me to say how much better adjusted they are psychologically now that they have heard and accepted my message, for now they are ready to accept collapse with equanimity and poise. This is sure to make their company less tedious moving forward.

And so I had my “Eureka!” moment in 1995, and a decade later, in 2005, I went public with my observations. I got a surprisingly sympathetic response from some particularly enlightened people (even if they said so themselves). And now, a quarter of a century after my initial insight, as the US enters national bankruptcy and institutional collapse, the whole world is being treated to an end-of-empire spectacular election extravaganza starring none other than the consummate showman and impresario extraordinaire Donald Trump. He used to run beauty pageants, while this one is more of an ugliness pageant, but then beauty is rare and always fades while ugliness is commonplace and usually just gets uglier, making it a much safer bet. And so let’s accept it as a parting present to the world from a vanishing nation that gave us horror flicks, reality television and three-ring circuses with sideshow freaks.

Within the sweeping panoramic tableau of the 2020 election, Trump (our hero) appears bathed in a golden sunset glow of nostalgia for lost American greatness which he forever promises to rekindle. Rest assured, Trump or no Trump, America will never be great again. But Trump’s magic halo extends out from his resplendent orange cranial plumage and enfolds all those who pine for the lost Pax Americana and fear and loathe what America is fast becoming—which is, to put it bluntly, a holding tank for degenerates of every stripe presided over by a freak show. They pine for a time when men were manly and women womanly, when secretaries were flattered when their bosses took time away from their busy schedules to rub up against them, and when everyone was either a WASP, or worked hard on trying to look and act like one, or kept to their assigned station in life and knew better than to get too uppity. They want to believe that the ethnic melting pot can still produce noble alloys, preferably Corinthian bronze, and certainly not clinker or slag.

Arrayed against our fearless orange-hued leader, who at 74 is no spring chicken himself, is a ghoulish gaggle of geriatric gerontocrats.

There is Joe Biden, 77, whose brain ran away and joined a circus some years ago but who imagines himself to be president-elect, or senator, or vice-president, or something. Having spent eight years lurking in the shadows as Obama’s VP, Biden is as fit to lead as a pig is kosher after rubbing its side against a corner of a synagogue. To assist Biden in his dodderings there is his party-appointed nanny, Kamala Harris, a mere slip of a girl at 56.

Also haunting the balcony of the American mausoleum is Nancy Pelosi, 80, who still runs the House of Representatives even though proper employment for her at this point would be up on a pole keeping the birds off the corn. There is also Bernie Sanders, 79, a sad pagliaccio whose permanent role in the political Commedia dell’Arte that the Democratic Party stages every four years is to simulate democracy by cheerleading crowds of young imbeciles in Act I, to feign death after falling off his pogo stick in Act II, and to stagger to his feet, wave and smile for the curtain call.

Last but not least, there is the horrid harpy Hillary Clinton, who is relatively young at 73 but whose putrid smell and cadaverous, ghastly visage are not longer fit for public display except in most delicately contrived circumstances. Hidden even further backstage is the suppurating cadaver of George Soros who, at 90, is still pulling the strings and wreaking havoc in the US and around the world. (His minions had recently spread color revolution to Armenia, in turn causing it to “elect” Pashinyan, a choice imbecile and a traitor, who then lost a big chunk of Armenian territory to Azerbaijan.) I could mention quite a few other financial corpses and oligarchic cadavers, but will refrain, to avoid giving you nightmares. Nobody lives forever, not even Henry Kissinger, 97, and so all we have to do is wait.

In healthy societies, older leaders age out and make room for younger leaders who take over for them after a lengthy period of study and apprenticeship. In sick societies, older leaders cling to power with no one competent there to replace them and once they die are replaced by traitors and criminals. The USSR and the USA are two such examples. The late Soviet serial gerontocracy of Brezhnev, Andropov and Chernenko, who for a time haunted the balcony of the Lenin mausoleum and, once dispatched to the netherworld, were swiftly replaced by the traitorous duo of blabbermouth Mikhail Gorbachëv and Drunk President Boris Yeltsin, was a tragedy for Russia. The resulting die-off was of the same order of magnitude as the losses incurred during World War II. In accordance with the worn-out cliché about history repeating, the current American gerontocracy is more of a farce than a tragedy, but its results are likely to be no less lethal for the population.

To complete this ghastly tableau, in the ongoing US presidential election, an almost-dead candidate and his charming assistant have been voted for by an army of the undead: voters that have mailed in their ballots in spite of being deceased. I have spot-checked a bit of the incriminating evidence myself, and I am pretty sure that there were over 11,000 such voters in a single Michigan county alone. But this is by no means a local scam: among many other vote-counting shenanigans, it appears that there was a nationwide effort to order mail-in ballots for dead people, fill them out for Biden, and mail them in. You might say that this is a human rights issue: why deprive dead people of their right to vote? Isn’t it about time to stop discriminating against the dead? Perhaps LGBTQ should be amended to LGBTQD for “Dead.” But why stop there? Why not also add a “U” for the unborn and stop this unpardonable discrimination against abortions? 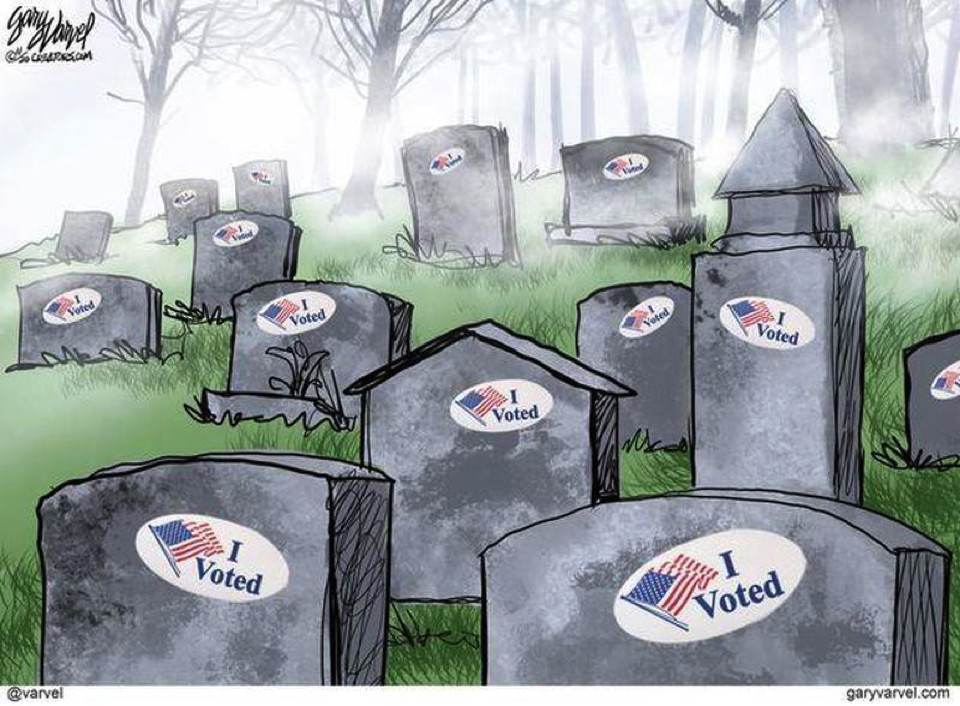 In any case, dead voters for Biden turn out to be just the tip of an entire iceberg of election fraud. There are also the over 1.8 million nonexistent yet registered voters discovered by Judicial Watch back in September. Add to that the faulty voting system, creepily named “Dominion,” which miscounted votes to favor Biden. Add to that the undeservedly kid-gloved and fawning press coverage afforded to Biden and the US mass media’s overwhelmingly hostile attitude toward Trump. Add to that the fraudulent poll data which, just as prior to the 2016 election, was contrived to make a fraudulent Biden victory seem plausible. Add to that the amply funded organizations such as BLM and Antifa (in which the “Anti-” prefix is gratuitous, this organization in fact being very much “Fa…”) which have been ordered to protest, loot and riot in many major US cities, moving their mercenaries from location to location, where they then recruit useful idiots among the locals. What this adds up to is a vast, brazen, carelessly self-incriminating conspiracy to overthrow a sitting president through election fraud.

If you believe even for a moment that I am scandalized, disgusted and outraged by this trampling of the sacred principles of democracy, then pardon me while I shake my head sardonically while quietly chuckling to myself. No, I am not the least bit upset. In fact, this development fills me with optimism for the future. I believe that this ghastly institutional failure is a wonderful development that offers great hope to the rest of the world, and perhaps even to the US itself, although the political environment in the US appears to be rather hopeless irrespective of how horribly or wonderfully its ridiculous electoral system can be made to function.

In any case, it would be futile to try to give the US some semblance of a democratic election system. It would be like trying to clean up a beach by picking up empty beer cans around a beached whale. The presidency, after four years of ham-handed efforts to unseat a president using false evidence, is a failed institution. Congress, which now nonchalantly overspends federal revenue by a factor of three, is a fiscal zombie. The Federal Reserve, which is now a pure pyramid scheme, is a financial zombie. And then there is the rest of the ridiculously bloated US economy, which is waiting for a stiff gust of wind to cause ephemeral wealth to flood out of stocks and bonds and into cash, much of it evaporating in the process and the rest causing a tsunami of consumer price inflation.

In the course of this spectacle, the false image of the US as a shining city on a hill, a beacon for huddled masses yearning to breathe free and a beneficent global policeman safeguarding “universal human rights,” enforcing “universal human values” and spreading “freedom and democracy” around the world is being stomped into the dirt, having excrement poured all over it, and being stomped into the dirt some more. As the curtain descends on this final act of Pax Americana, the image of the orange enfant terrible and the senile puppet with his child-nurse in tow playing on the teeter-totter of electoral dysfunction on the playground of second childhood will forever remain etched into the retinas of the whole world. The whole world will then be able to move on and look for worthier role models and for less corrupt policemen. And that’s progress!

The collapse of the USA will make the collapse of the USSR look like a stroll through a leafy park and a boat ride on a placid pond. I’ve been saying this for 15 years now. My message is still there, for all those who wish to understand what’s been happening and to keep their sanity.