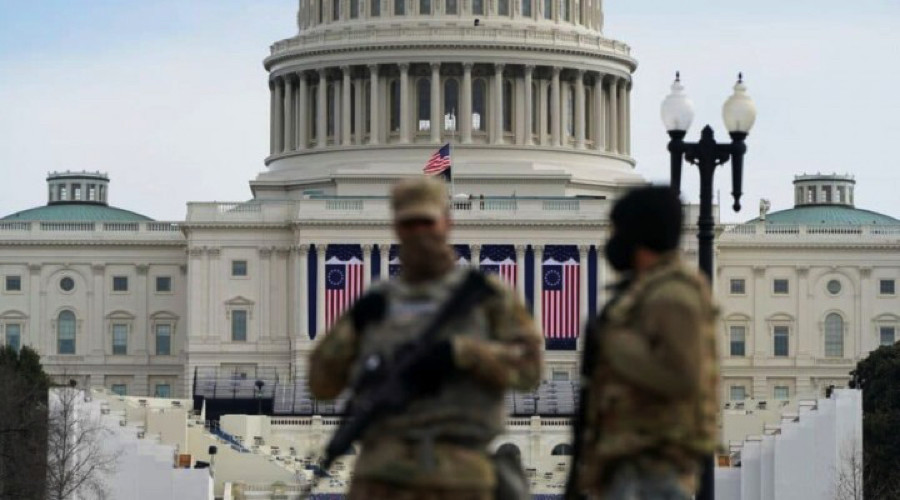 Without Democracy in the U.S.,
Can the Simulacra of Democracy Survive Elsewhere?

Trump walked into the DC ‘Forum’, and ended ‘stabbed to death’, as had Julius. It has been truly Shakespearean, Alastair Crooke writes.

The ‘Ides of March’, they came early this year – on 6 January, at least for one current U.S. ‘Caesar’. What happened; how it happened; who concocted the Capitol events, will be long debated. However, the daggers had long been sharpened for Caesar, well before the invasion of the Capitol. In a sense, the stage was already set – Trump walked into the DC ‘Forum’, and ended ‘stabbed to death’, as had Julius. It has been truly Shakespearean.

It was well-known that Trump might well reject the election results, because of postal ballot potential fraud (as postal ballots assumed their disproportionate 2020 electoral predominance). The Transition Integrity Project (TIP) precisely (purposefully?) had taunted Trump last June with its forecast of a contested election in which Trump would lose – after “all of the mail-in ballots had been tallied”. The TIP then had turned to the prospective tactics and tasks for forcefully ousting a President-in-denial from the White House. (The media and ‘platforms’ had been participants in this early war-gaming of how to deal with a Trump, who contested the election result, and questioned the legality and authenticity of postal ballots).

It needn’t have been this way – but no compromise on rules on postal balloting was attempted (rather, the reverse). In any event, the Capitol invasion now stands as a major psychic event (the “Insurrection”) searing the American consciousness. Apart from unnerving the legislators, unused to experiencing a sudden loss of security, the invasion has become the sacrilege to a ‘sacred space’ (with all the additional connotations of America’s exceptional, divine mission). The daggers were gleefully plunged in – Trump is impeached again; he is to be tried in the Senate after the Biden inauguration; and he and his family, may expect the legal dismemberment that will follow.

The ‘Blue State’ has – from Trump’s first election – been determined to crush him. That is underway. And somehow sychronistically, we now have the Tech digital deletion of Red America from social platforms, with talk of a ‘purge’ and cultural ‘re-education’ for his supporters (and their children), as well. Biden is already speaking like a War President (and the Capitol now has taken the air of a theatre of war, with troops and weapons strewn about its corridors): “Trump”, said Biden, “has unleashed an all-out assault on our institutions of democracy, from the outset, and yesterday was but the culmination of that unrelenting attack”.

Here is the key first implication to that ‘psychic event’ – not just for Americans, but for the world spectating the unfolding events: Biden has called for measures against “domestic terrorism”, and used language that is usually reserved for combat with an external enemy state – language such as accompanies major wars. This is ‘revenge cycle’ material. In the case of two nations, literally at war, they do do this. This is a part of it. They hope to resolve their conflict through humiliation, repression and the forced submission of the other (i.e. Japan after WW2). But America is, at least nominally, one nation. What happens when a single nation splits, with one turning the ‘seditious’ elements into an ‘alien other’?

We do not know. But hatred is intense, both toward Trump and the ‘deplorables’. And now, these sentiments are reciprocated in the wake of the President’s humiliation, at a contents-free impeachment, reached in few hours. What seems certain is that the course of events likely will lead to a self-reinforcing cycle of ever greater polarisation.

The rise of Trumpism has created a new radical Manicheanism amongst the liberal élite. Tech, with its algos feeding like-minded material to the like-minded, has a lot to do with this digital and ideological divide. But the bottom line is that this divide is (falsely) cast as a death-struggle now underway between a monolithic liberalism and a monolithic illiberalism.

This carries a huge message for Russia, Iran and China (and others) – the U.S. is deeply divided, but its ‘new mission’ will be a ‘moral high-ground’ war against illiberalism – at home, firstly – and then overseas.

Yet of greater – and wider – significance is that the ‘noble lie’ – the mask concealing the cynical arrangement that is American ‘democracy’ – has been stripped away. The crucial import was underlined by the German FM, Heiko Maas, when he observed: “Without democracy in the U.S., [there is] no democracy in Europe”.

What might have Maas meant? Possibly, he was referring to the angry 75 millions of Red America that have now grasped the shocking magnitude of the fraud played on them. By fraud here is not a reference to the particular claims about 3 November, but to the much bigger fraud of a system rigged in the interests of the Establishment. This has been one of the basic props to the engineered consent upon which public order and social stability in America and Europe has rested for decades: the naïve belief in the democratic essence of the system.

This prop is being overturned by the ‘Blue State’ precisely in order to savour a sweet revenge on Trump for pulling aside the mask on so much else of ‘Establishment America’. Trump laid bare how corrupt the ‘swamp’ had become, and he articulated Red America’s deepest concerns and frustrations about off-shored jobs, economic precarity and ‘forever wars’. They, in turn, had projected their exasperation, bitterness, and illusions back onto him, turning him, by default, into their standard-bearer.

Yet – astonishingly – this toppling of the pillar of an engineered ‘noble lie’ is being done precisely by those (the Establishment), who one might have thought, had the most interest in keeping it intact. But they cannot resist it. They just cannot forgive ‘outsider’ Trump’s intrusion into their neatly constructed illusions: trashing their elaborate ‘construct’ of reality, simply by magicking up new ‘facts’ to contest their ‘science’.

Isn’t this what is so frightening for Merkel and Maas? The EU has its own, more fragile, ‘noble lie’. It is this: States – by relinquishing a portion of their sovereignty – might hope to participate in a ‘greater sovereignty’ (i.e. the European Project), and still believe that it is ‘democratic’.

This cynical European arrangement only stands if Merkel and Macron can hold up American ‘democracy’ as the guiding principle to the European Project (however misleading that may be). But now, with the ‘lights going out’ in the ‘City on the Hill’, and with only a broken democracy ideal under which EU leaders may shelter, how will the dreary formula of a diluted sovereignty, with no real democracy; with no roots in the ground below; with the EU moving to ever closer oligarchy, and led by an unaccountable, and secretive ‘politburo’, survive?

The point is that European ‘democracy’ is also rigged towards Germany and the élites. And ordinary Europeans have noticed, (especially when only one part of the community bears a disproportionate burden of the Covid economic pain). The élites fear Trump: he may lay it all bare, for all to see.

Some EU leaders may hope that Trumpism will be so completely crushed, and its voice silenced, that Europe’s own fracturing engineered public consent can be contained. Yet they must know, in their hearts, that recourse to identity and gender ideology (as pretext for greater state-ism), will only armour-plate the bubbles and divisions because they prevent people from hearing each other. It is the post-persuasion, post-argument politics of polarisation.

For sure, the rest of the world are taking close note. They will not be accepting moral lectures from Europe in the future (though undoubtedly, they will still get them), and states will look to build ‘public consent’ around quite different ‘poles’ – loose concerts of states, traditional culture and the historic narratives of their communities.