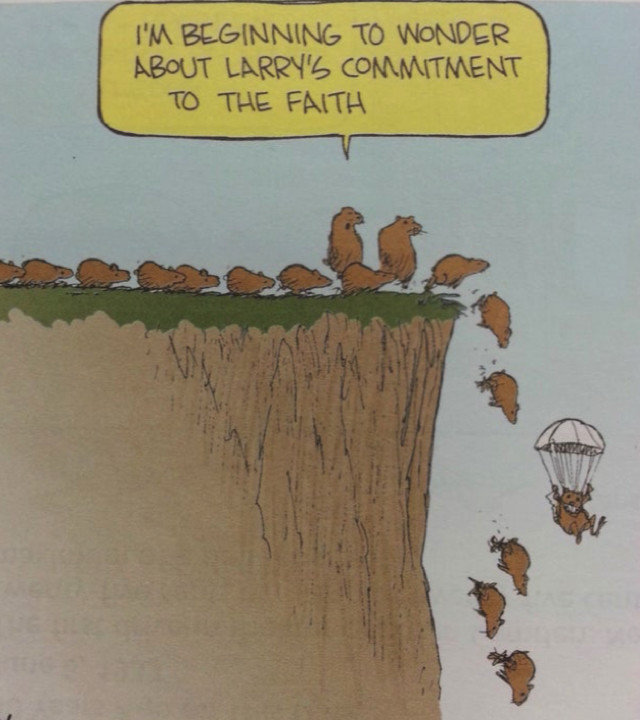 I’m beginning to wonder about Larry’s commitment to the faith.

The Great Reset as a Suicide Pact 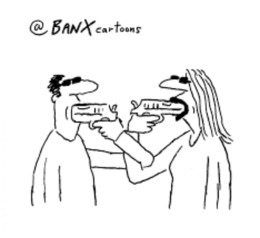 The recent virtual meeting of the world's richest at Davos made quite a bit of noise. In the run-up to it the perennial fluffer of plutocratic egos Klaus Schwab published a very short book about what he’s been calling The Great Reset. It has given rise to catchy slogans such as “You’ll own nothing… and you’ll be happy about it.” One of the people invited to speak at this meeting was Vladimir Putin. What he said put people in a state of shock. “But what about Europe?!” Schwab cried out plaintively as soon as Putin finished speaking. “Mr. Putin, will Russia save Europe?!” “Possibly,” said Putin. Of the assembled worthies, 80 immediately signed up for a closed conference with Putin to find out how to get in on that. After taking all of this in and letting it simmer in my brain-pan for a couple of weeks, I believe I now understand what the Great Reset is: it is an oligarchic suicide pact. Please allow me to explain…

In his talk, Putin set out some bold new ideas. I don’t know if Schwab understood that Putin ever so politely told him to go stand in a corner and suck his thumb, but as an idea man Schwab is a disaster. His thinking is a muddle of pompous platitudes, wishful thinking and relentless self-contradiction served up with a senile revolutionary fervor worthy of Leon Trotsky who, at 141 years of age, would indeed be quite senile by now. Western leaders seem to have accepted Schwab's grand concept of the Great Reset and have been running around abusing another catchy slogan: “Build back better!”

Schwab thinks that the coronavirus provides a great opportunity for his Great Reset. Indeed, this horrible plague has already killed over a third of the world's population and the world will never be the same again. Oh, wait, that’s the Great Plague I was thinking of. Great Plague, Great Reset—I keep getting the two confused…

Looking up the latest official numbers, the coronavirus has only killed 0.02821% of the world’s population, 73.6% of them retirees, most of the rest gravely ill with something else already. A lot of them actually died of the common cold or the flu or some bacterial or fungal infection and tested positive for coronavirus on the ever-so-unreliable PCR test, but we’ll never know how many. The coronavirus has killed a *RoundingError* of children and less than 0.001% of healthy people in their productive years (18 to 45). That’s less than one person in a million.

Significantly fewer people have died as a result of shoving dangerous foreign objects, such as light bulbs, up their anuses, though one may wonder just how significantly. Taken in this light (pun intended) New York Governor Andrew Cuomo’s stance that “no measure, no matter how draconian, could be deemed unwise if it saves but a single life”would lean one to ban all light bulbs and safely sit around in the dark. Perfect safety is impossible and if it were it would be a bad idea: we’d be up to our necks in Darwin award winners. Perfect safety shouldn’t exist. Idiots occur naturally and do us all a great service by dying as soon as possible.

Something else that shouldn’t exist is SARS-COV-19. As you may have surmised by now, it is a coronavirus. Coronaviruses are very common in all sorts of species; there is at least a dozen common human ones that don’t cause any particularly severe illness. A commonly understood fact about coronaviruses (and most other viruses, with the specific exception of lyssavirus which causes rabies) is that they are species-specific. There is a dog coronavirus that gives them diarrhea; there is a cat coronavirus that kills them; no amount of mingling of cats, dogs and humans over thousands of years has caused any of these coronaviruses to jump species.

And then we are expected to believe that a bat virus jumped to humans. Analysis of the virus genome showed that it simultaneously borrowed a spike protein from a human coronavirus allowing it to penetrate human cells and the replication mechanism from HIV (which causes AIDS) that allowed it to replicate itself within human cells. Sure, anything is possible, but what’s more likely is that somebody went ahead and made this virus.

Does this sort of thing happen? You'd think that a person who wants to make viruses more lethal belongs in a straitjacket in a padded cell, but apparently some of them have escaped and went to work for the US government. ”Researchers studying viruses in the lab sometimes deliberately make them more dangerous to help prepare better responses to outbreaks that might occur naturally.” And sometimes what happens in the lab doesn’t stay in the lab.

Not only is this virus likely to have been concocted in the lab, but it appears that it has been concocted incompetently. It is a crap virus that doesn’t replicate well: instead of making well-formed, functional virus particles it makes all kinds of molecular garbage that then causes severe allergic reactions. You have probably heard of cytokine storms? The release of cytokines is central to almost every stage of the immune response to allergens. Children are immune because of an organ called the thymus which is “largest and most active during the neonatal and preadolescent periods.”

Again, anything is possible, but some things are more probable than others. A coronavirus spontaneously jumping from bats to humans is extremely improbable. A super-creepy and evil US government-funded research project going horribly wrong seems not only much more probable but has a certain whiff of inevitability about it. Given the ongoing degradation of the US, at this point just about anything the US does tends to boomerang on itself. So far there have been 2.31 million coronavirus deaths worldwide and 463 thousand in the US, which is eight times worse per capita than the average for the rest of the world. Nice going, intrepid American government-funded gain-of-function boomerang makers!

What is a disaster for most is an opportunity for a few, and Klaus Schwab, for one, seems to think that if life gives you a box of boomerangs then you should hurry up and use them to knock yourselves out. Schwab’s point is that we won’t have the coronavirus to kick around forever, so we should really hurry up with the Great Reset or we’ll miss the chance to all hold hands and jump out of what he calls “the window of opportunity” and the world will never be the same again because you can’t step into the same river twice or make up your own stupid platitude because I don’t much care for any such nonsense. Schwab really seems like a poster by for Western cognitive dysfunction, so let’s leave him standing in his corner eating glue and get back to Putin.

Putin said that the Western liberal system is dead and that Russia won’t have any of this “Great Reset” nonsense. Instead he laid out his own principles for what in Russia is called “the social state”: one that works well serving the interests of its citizens. The West can either come along with this program or not. But if it doesn’t then a humanitarian disaster on the scale of World War II appears quite likely. You can read his entire speech here. You may also wish to compare his speech to what China’s Xi said. Xi didn’t suffer any of this Great Reset nonsense either, and his grand plan seems suspiciously well harmonized with Putin’s.

The right way to move the world forward is a huge topic that I will save for another day. Here, I just want to answer the question, What is the Great Reset, really. To reset something is to set it to its original state. What was the original state of your bank account when you first opened it? Exactly! And what does a conclave of the world's super-rich people control? Why, finance, of course! I think that calling it the Great Nullification would be more accurate. But how will the super-greedy determine who gets nullified and who doesn’t?

Since the poor by definition have nothing to nullify and the middle class no longer exists except as a repository of debt that is gradually nullifying itself, super-rich only have each other to nullify. And how, pray tell, will they decide who gets nullified and who doesn’t? Will they cast dice? Will they fight duels? Will they let an AI robot decide? All such proposals seem outlandish; after all, we are talking about the world’s greediest bastards who are about to lose it all. How would you like to have all of your bank accounts nullified while your neighbor is spared? See what I mean? No, there is only one way they will all agree to go: jump off the cliff all together, holding hands. In this context “Build back better!” is a dream of an afterlife: the rescue spaceship from a future that will never come.

What they are calling the Great Reset is a suicide pact. The reason for the rush to get it over with while the oh-so-fatal coronavirus pandemic is still presumably raging is to make their mass suicide seem less ridiculous. After all, if the faux-pandemic passes and only then does the Western financial system implode, then it will be as if all of the grand oligarchs simultaneously walked out on their balconies, slipped on carefully prepositioned banana peels and synchronously stove in their temples on the finials decorating the corners of the parapets. Half the planet would see that and also die—laughing. The worst kind of death is a ridiculous death, and so Western financial collapse has to happen while “The coronavirus did it!” still remains plausible as an excuse; hence the rush.