The Belarus Affair, take one 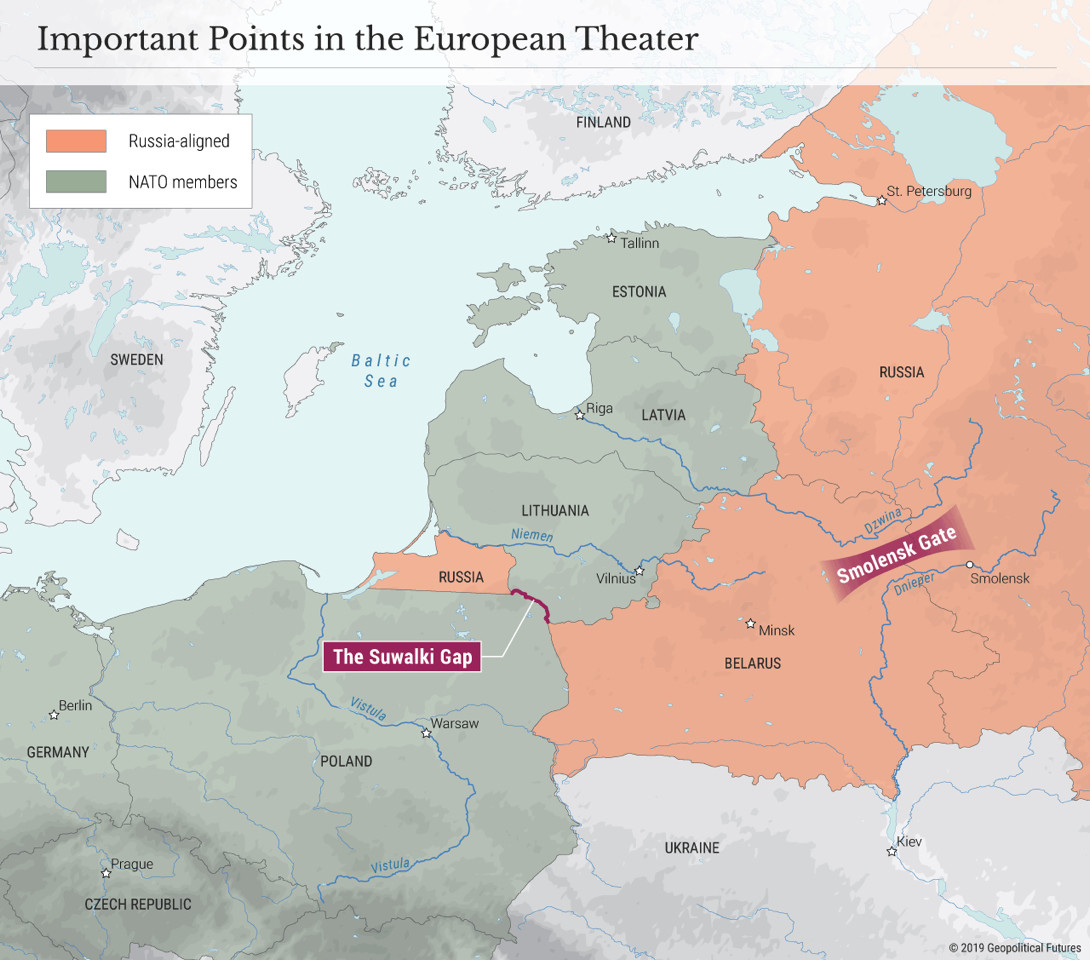 The incident has drawn strong condemnation from the rest of Europe.

By Ekaterina Zolotova at Geopolitical Fututres on May 26, 2021

The fallout from Belarus’ diversion of a commercial plane over the weekend is still unfolding. The incident happened on Sunday, when Belarusian authorities forced a Ryanair plane en route to Lithuania to land in Minsk, supposedly because of a bomb threat. Once the plane landed, they arrested opposition journalist Roman Protasevich, the founder of a channel called Nexta on the Telegram messaging app. Nexta had covered the mass protests last year against Belarusian President Alexander Lukashenko, who personally ordered the plane’s grounding. Details about what precipitated the incident are sketchy, but what matters more is how this will affect Europe’s relationship with Belarus and Belarus’ top ally, Russia. 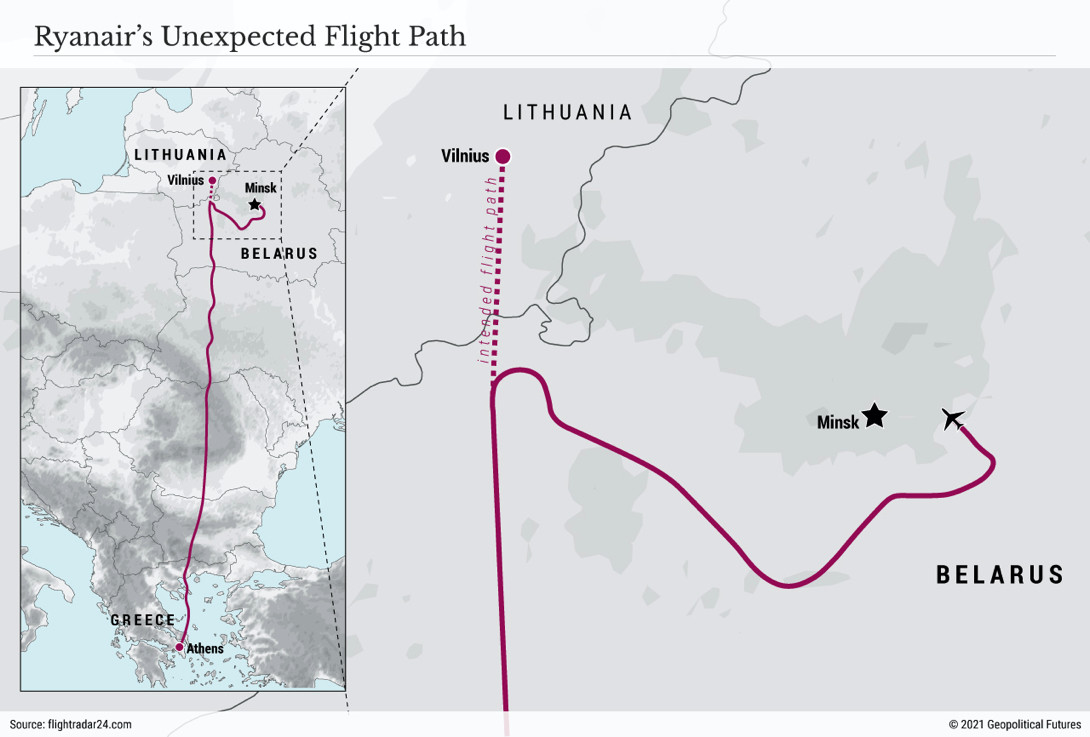 A number of theories have been floated about what exactly happened and why. In the absence of an investigation, we can posit two possible explanations. First, Lukashenko may have wanted the journalist arrested to try to put the squeeze on the opposition, which has enjoyed growing support among both the Belarusian public and foreign powers. If this was what motived the move, it would indicate that Lukashenko believes his position and that of his government is getting weaker, especially since the protests following the disputed elections last August. The threat posed by Protasevich must have been serious enough for Lukashenko to risk angering the West by scrambling a fighter jet to force the landing of a commercial plane midflight. This explanation doesn’t seem sufficient, however. The threat to the president after the protests last year seems to have been tamed enough not to warrant such a drastic move. Lukashenko stayed in power, and recent demonstrations have been smaller than those that followed the election. Tough new media restrictions were also imposed, and many opposition figures either left the country or were detained.

A second possible explanation is that Minsk really did believe that there was a bomb on board the plane. The head of the aviation department at Belarus’ Transport Ministry said unidentified individuals who called themselves Hamas soldiers had threatened to blow up the plane the day before, demanding an end to Israeli aggression in Gaza. The CEO of Ryanair said the bags of the passengers were searched after the plane landed, although one passenger said authorities made no effort to rush passengers off the plane and demonstrated no concern while searching passengers and their bags that an explosion might be imminent.

Either way, the incident has placed significant pressure on Minsk, which could now see fresh protests and calls for Lukashenko’s removal and new elections. All of these possibilities would only further isolate the president.

Many countries in Europe and beyond have condemned Protasevich’s arrest and the forced landing of the plane. Britain banned flights from Belarusian state-owned carrier Belavia. And Lithuania blocked all planes from Belarus from landing at its airports. EU members decided during a summit on Monday to ban Belarusian planes from flying to the bloc and called on European carriers not to transit through Belarusian airspace. Germany’s Lufthansa, Latvia’s Air Baltic, Hungary’s Wizz Air, Poland’s LOT, the Netherlands’ KLM and Sweden’s SAS all announced that their planes would not fly over Belarus. 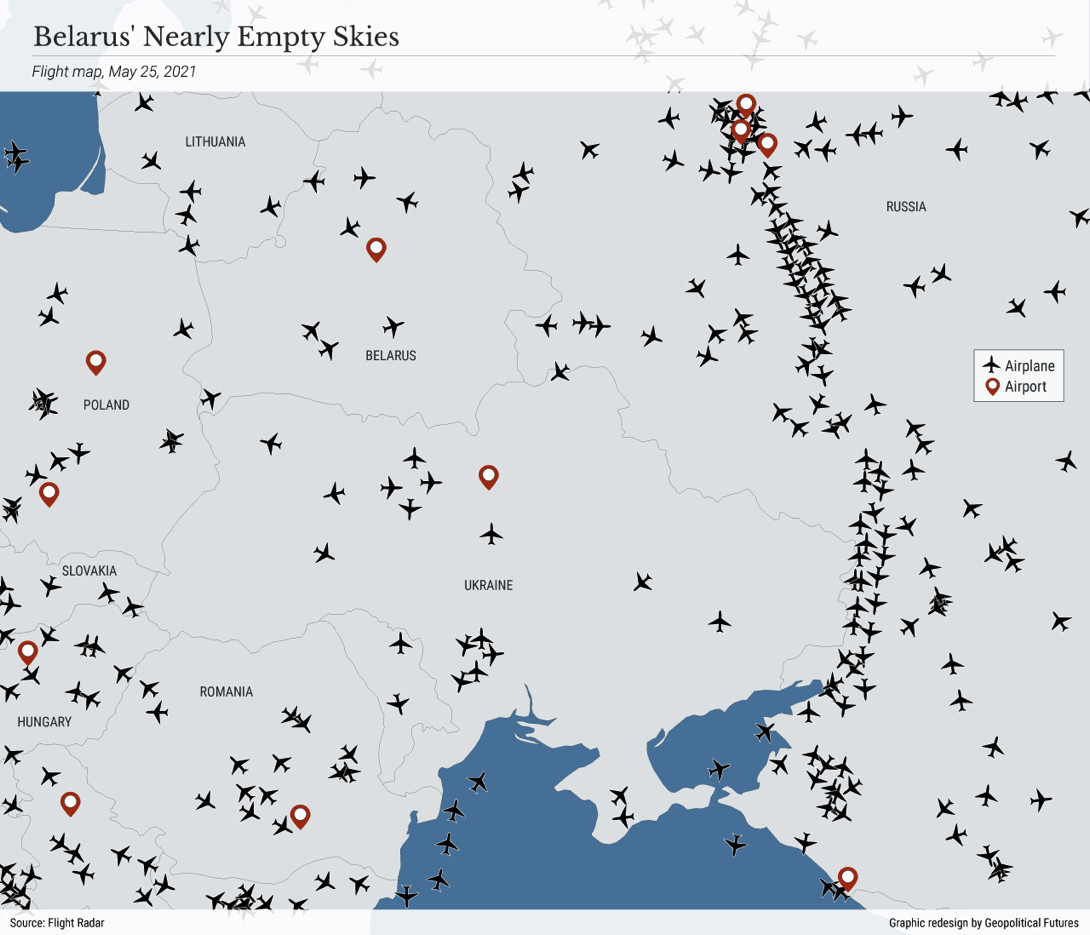 These measures are particularly punitive during a pandemic that has placed the airline industry under serious strain. Now that lockdown measures are beginning to ease, having flights to and from Europe severely restricted could affect the recovery of Belarusian airlines and the Belarusian economy in general. Belavia is planning to cut its staff – by up to 50 percent, according to some sources – due to the European backlash.

As for Moscow, it has said that it doesn’t want to intervene in an issue that’s mostly between Belarus and Europe, likely trying to bide its time until it sees what the full fallout will be. It has used this wait-and-see strategy before, including during the protests against Lukashenko last year, though it could still react if it deems doing so necessary.

Rumor has it that Lukashenko will meet with Russian President Vladimir Putin in Sochi on Friday. The two leaders will likely discuss how the Ryanair incident could affect transport between the two countries, especially considering that Belarus was an important corridor for travel between Russia and Europe. Russia might now become a corridor for travel between Belarus and Europe, especially as the summer tourist season heats up. So far, Russian airlines have made no changes to flights, but if they were to stop flying over Belarusian territory, under the threat of sanctions, they could find other routes to Europe – as they have done since the 2014 plane crash in Donbass that led to that region’s airspace being declared unsafe. Moscow also recently introduced a new train route that reaches Minsk in seven hours for the ridiculously low price of $20-$30.

The Kremlin is also likely concerned about Western retaliation directed at Russia. The European Council already agreed to impose new sanctions on Belarusian individuals, companies and sectors. Moscow can only hope that European leaders will find these measures sufficient punishment and not seek retribution against Lukashenko’s biggest foreign supporter. However, the U.K. said it was considering sanctions against the Nord Stream 2 and the Yamal-Europe pipelines, both of which carry – or, in Nord Stream 2’s case, will eventually carry – Russian energy supplies to Europe, and the latter of which passes through Belarus. The dilemma for Moscow, which is eager to avoid any additional pressure on its economy, is that it needs to balance between pacifying Belarus and not further aggravating Europe.

Despite the intrigue over what led to the grounding of the Ryanair plane, the key issue here is how the European response could impact Russia as well as the Belarusian government and opposition. Moscow views any threat to the Belarusian leader as a threat to itself. Belarus is Russia’s last remaining ally on its western border, which explains why Moscow works so hard to keep Lukashenko in power and to keep him loyal to the Kremlin. But doing so is getting harder.