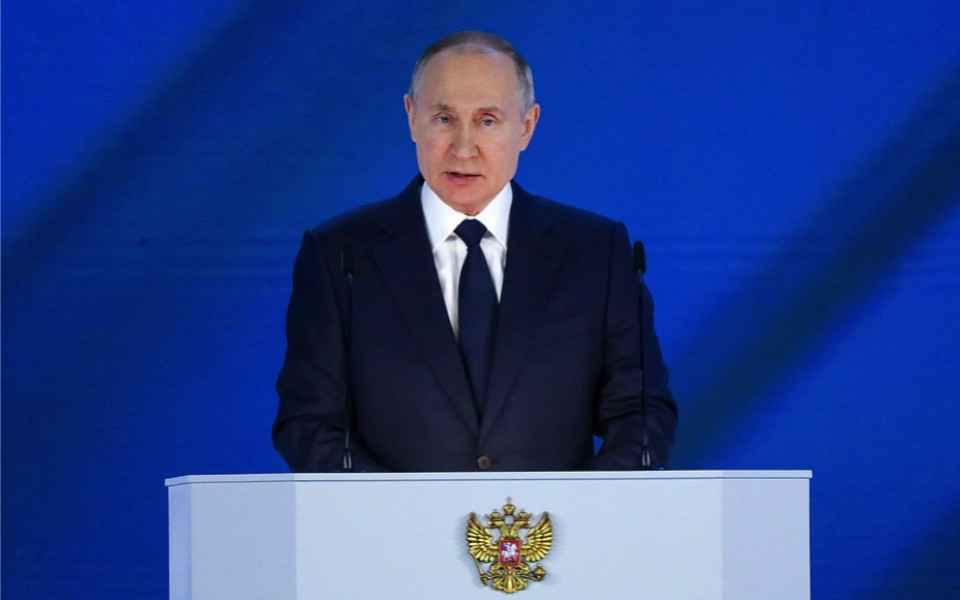 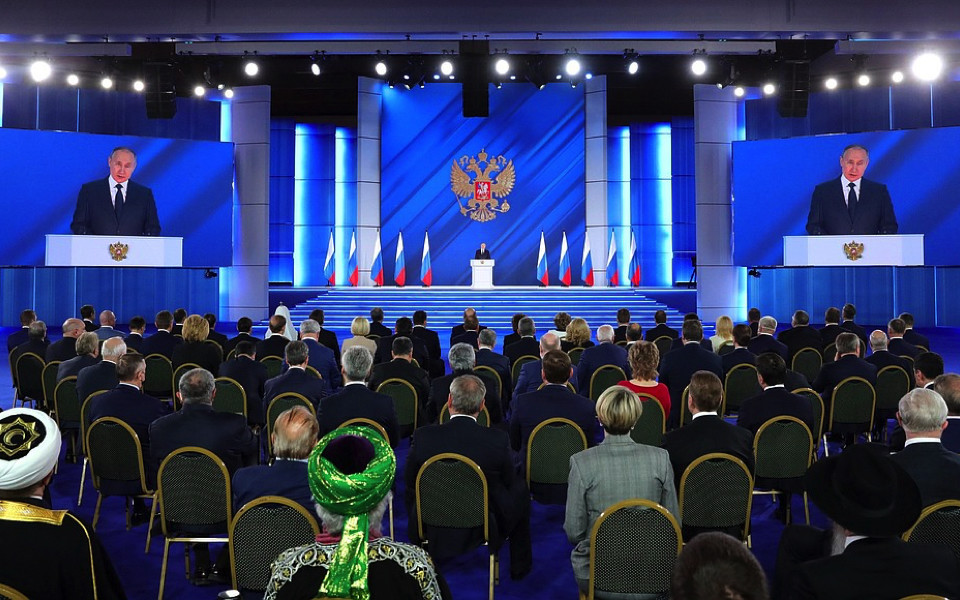 During the Presidential Address to the Federal Assembly. April 21, 2021. Photo: TASS.

Putin picked the 21st day of the 21st year of the 21st century, in the 21st year of his illustrious reign as an auspicious date on which to give his annual address to Russia's Federal Assembly. You can read it yourself here. What follows is my own opinion as to what it means.

Now, let me unfold this for you.

The last year has been a difficult one for everyone, including Russia, because of a certain very nasty virus. Although not as lethal as some previous viral pandemics, such as the Hong Kong flu of 1968, it was still nasty and caused some rather unpleasant complications. The crisis was made much, much worse by certain meathead epidemiologists and their ridiculous computer models who claimed that lockdowns, mask-wearing, standing 1,5m apart and other nonsense would have a significant effect on the spread of the virus and the ultimate fatality rate. A huge body of accumulated evidence has shown that these measures were not effective, and the theories on which they were based are now destined for oblivion along with faux-epidemiological novelties such as "asymptomatic transmission." But the damage these measures have caused, in economic damage, in ruined livelihoods and in a legacy of health problems borne of isolation and neglect, persist to this day.

Russia has made it through this crisis better than most countries. It has developed four different vaccines, one of which, Sputnik V, has received regulatory approval in over 60 countries and has become one of Russia's hottest exports. It has built many large hospitals with ICUs and expanded existing ones to deal with an influx of patients with viral pneumonia and other complications. Resisting international pressure, it never imposed excessive restrictions, reopening schools as soon as possible and reducing mask-wearing to a sort of optional virtue-signaling masquerade in support of a voluntary program of free immunizations. As a result, economic and social damage has been minimized and national projects moved on according to schedule.

Nevertheless, there is a lot more for the Russian government to do to help the Russian people. Among the most frequent words in Putin's speech were "family" (20 times), "children" (26 times) and, of course, Russia. Included are such bits as 100% paid family leave for mothers of young children, financial support for low-income pregnant women, 50% discounts on summer camp for children, sizable cash payments to parents of school-age children right before the start of each school year, etc. Already 60% of Russia's schoolchildren are currently eligible for free higher education once they graduate (the highest percentage in the world) and Putin plans to grow this number substantially. All of this social largesse will be financed out of a virtually deficit-free federal budget. (Russia's budget deficit is currently around 8 billion USD and is likely to disappear altogether as oil prices increase. Compare that to the US, which overspends its revenues by a factor of 2.5 and is headed for an annual budget deficit of $3.5 trillion.)

In short, Russia is going to be busy, so don't bother it. And if you do... well, here Putin gave a short lecture on the manners of bears, the Russian bear specifically. He pointed out that various other countries have been trying to bother Russia, accusing it of all sorts of ridiculous things. Their favorite fictional protagonists have been the dynamic duo of Petrov and Boshirov, GRU agents, incompetent killers and Salisbury steeple fanciers, showing up here and there with a perfume bottle full of nerve agent Novichok which they sometimes smear on doorknobs (as in the case of Mr. Skripal) or sneak into someone's underwear (as in the case of Mr. Navalny). Like that other nerve agent Botox, Novichok makes people look younger. Most recently, the dynamic duo hopped into a time machine and went back a decade to Czechia, where they blew up a munitions dump that had served as a staging area for shipping weapons to Syrian terrorists. Prague then used this bit of fiction to start a diplomatic row with Moscow. This sort of ridiculousness makes for good comedy and the resulting toothless sanctions-shmanctions motivate Russia to ditch unreliable trading partners and suppliers, so that's all good, clean sport.

But a recent incident which caught Putin's eye was not good, clean sport at all. In fact, he considered it beyond the pale. A certain US-Belarus dual citizen and another person were apprehended in Moscow while conspiring to assassinate Alexander Lukashenko, president of Belarus, his family and most of the Belarussian government. They also were planning to blockade Minsk, the capital city of almost two million, to knock out electricity there and much else. All of this conspiring to commit mass murder was caught on video and audio at a Moscow restaurant, shot from multiple angles. When confronted with the evidence, the two conspirators started confessing right away. The interesting point is that what they were planning couldn't have been carried out without the help of US intelligence agencies and special services, which will now be drawn into the case. Poor, poor US intelligence agencies and special services!

Putin made the point that you don't have to like president Lukashenko, or president Maduro of Venezuela, or president Yanukovich of the Ukraine, but conspiring to have them and their families assassinated is strictly verboten. People who take part in such actions shouldn't delude themselves that they can hide behind Uncle Sam's back; sooner or later the long bear-clawed arm of the Kremlin will ring their doorbells too. Now note, Yanukovich was overthrown in a US-choreographed bloody coup in 2014, narrowly escaping death, and the Ukraine has been a failed state ever since. Maduro and Lukashenko are still in place, and Putin would like it to stay that way until the Venezuelans and the Belarussians, respectively, vote otherwise. Also note, Putin said "President Yanukovich of the Ukraine," implying that Zelensky, the one-person comedy act who currently calls himself the president there, and who recently had the temerity to request a meeting with Putin—in the middle of a Ukrainian civil war zone, no less!—is even shorter in stature than he actually is. Nevertheless, Putin then magnanimously invited Zelensky to come and visit Moscow to discuss Russian-Ukrainian relations, pointedly leaving the inter-Ukrainian civil war as a matter for discussion between Zelensky and his counterparts in his breakaway regions.

Another entity that seemed to lose stature in the course of Putin's speech is NATO, when he rather tellingly misspoke but caught and corrected himself. Speaking of Collective Security Treaty Organization (ОДКБ), which currently includes Russia, Armenia, Kazakhstan, Kyrgyzstan, Tajikistan and Uzbekistan, he referred to it as "the Wars...ОДКБ." Here everyone realized that its Soviet-era predecessor was the Warsaw Pact and included virtually all of Eastern Europe, but Warsaw is now in NATO... but then NATO is nobody and nothing. NATO troops milling about on Russia's borders are just some gadflies buzzing around the bear's nose—annoying but harmless. So are EU and US politicians with their ridiculous false accusations and their useless sanctions. When they get too annoying their diplomats are declared personae non gratae and asked to buzz off.

Putin concluded this part of his speech by summing up the progress made on rearming Russia's armed forces. The plans are proceeding apace and Russia is already the preeminent military power on the planet, generations ahead of the US and NATO, and perhaps a year, perhaps two away from becoming immune to any and all military provocations. Already any attempt to engage Russia militarily is likely to become an instant "suicide by Russia." There is considerable danger in that the American leadership is incapable of accepting this as a fact, partly because of their customary haughtiness-cum-psychosis, and partly because, as Andrei Martyanov points out, their military strategists tend to be humanities graduates who can't handle the requisite math. We can only hope that they decide against suicide and, failing that, that there are enough layers of non-suicidal military specialists standing between them and what's needed to launch an actual attack.

It is perhaps to these non-suicidal technical specialists that Putin directed his last bit of wisdom on the manners of the Russian bear: "...We have enough patience, responsibility, professionalism, self-confidence and certainty in our cause, as well as common sense, when making a decision of any kind. But I hope that no one will think about crossing the 'red line' with regard to Russia. We ourselves will determine in each specific case where it will be drawn." If you know anything at all about bears, you know that, while not entirely unpredictable, they do not signal when they are about to attack. Bears too have an invisible red line that is known only to them; step over it, and they rip your head off. But some things are obvious; for instance, planning or carrying out political assassinations, military coups, mass genocide and other such atrocities is definitely on the wrong side of that red line. Those who wish to continue to run roughshod over the planet should take heed of Putin's warning, because it is likely to have been their very last.

Original article and readers' comments here.
To read the comments you have to be a subscriber.
This article on Dmitry Orlov's Facebook profile. See it here.