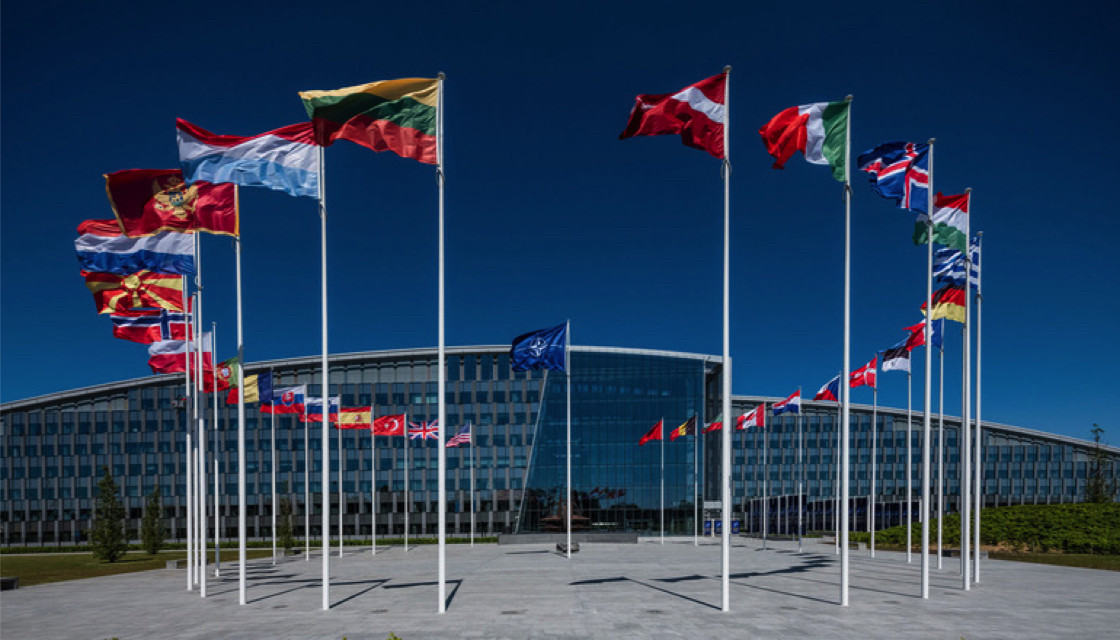 According with General Hastings Lionel “Pug” Ismay, 1st Baron Ismay, NATO first Secretary General, the purpose of the Alliance was

to keep the Russians out, the Americans in, and the Germans down

but, as the Russians are out today, NATO's purpose is certainly no longer to keep them out. 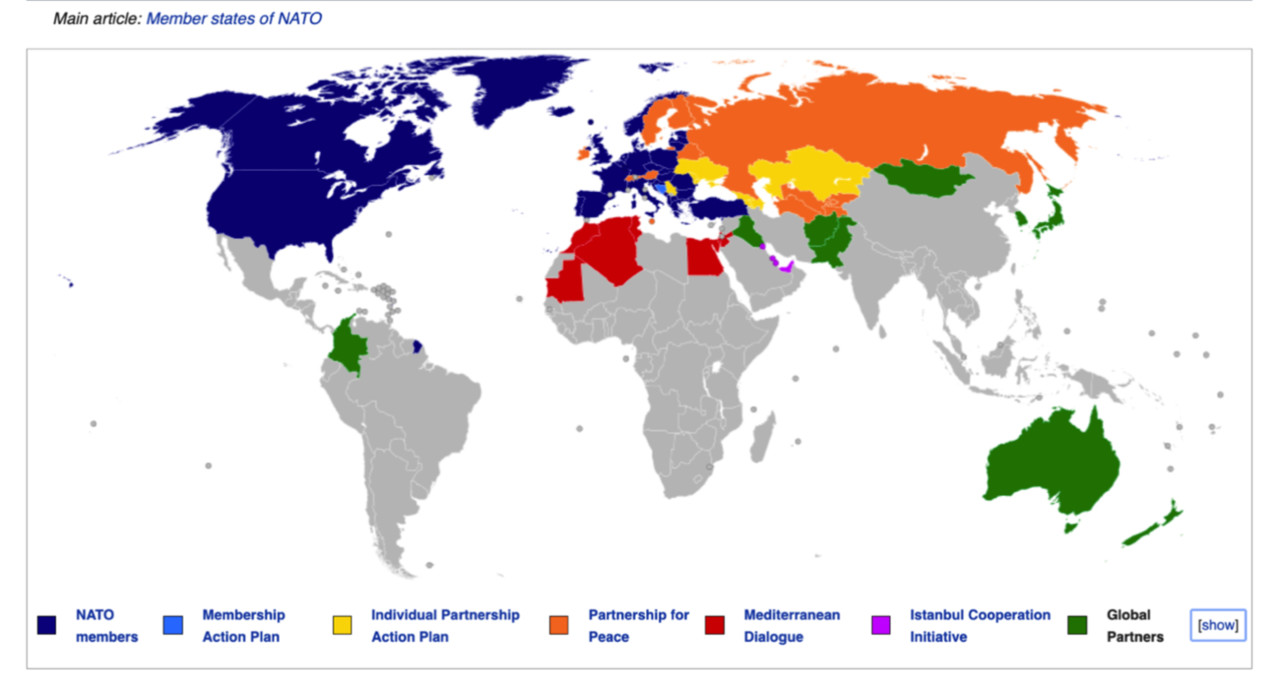 How Much Will It Cost To Enlarge NATO?

By Leonid Savin at Oriental Review on September 23, 2021

On 8 September, the Center for Strategic and International Studies, one of America’s leading security and foreign policy think tanks, published a study on NATO enlargement.

Its main emphasis was on the requirements of NATO’s armed forces and the costs involved. The very publication of the study is fairly symptomatic. While discussions at the yearly summits focus on the possible admission or deferment of new members, and US and UK representatives are constantly seeking to co-opt other states, which is a part of the rhetorical politics, a rational analysis of the pros and cons suggests a systematic routine, with detailed calculations based on previous experiences.

The authors of the study initially maintain that the project arose as a result of NATO success and a changing European security environment due to “a hostile and militarily strengthened Russia”. They also state that the value of NATO itself or its past enlargement is not in question. “Rather, the purpose of these discussions is to enhance the security of the United States and its NATO allies and to support stability in Europe broadly. Burden sharing of such future commitments would be an important political and military issue.”

Indeed, the size of each country’s contribution has been the subject of heated debate among members of the alliance over the past ten years. Obviously, the authors are raising the issue deliberately so that the decision-makers have enough time to develop the necessary mechanisms and options.

The study focuses on five countries: Georgia, Ukraine, Bosnia and Herzegovina, Finland, and Sweden. “Three of these countries – Georgia, Ukraine, and Bosnia Herzegovina – are actively seeking membership. Finland and Sweden are not seeking membership and remain committed to nonalignment.” Yet Bosnia and Herzegovina’s desire is a moot point because of the hardline anti-NATO position of one of its entities, Republika Srpska, and the specific status of the federal entity itself with limited sovereignty. However, the experience of Montenegro and Macedonia has shown that small Baltic countries can be absorbed by NATO fairly quickly if the conditions are right, i.e., their agents of influence have been placed in the country’s key decision-making bodies.

The authors also point to a surprising dilemma regarding European states. “The non-U.S. NATO members produce good capabilities for crisis response, small contingencies, and security cooperation, conducting many such missions since the end of the Cold War. For large-scale operations, the capabilities are severely limited. Compared with Russia, … the spending and forces of non-U.S. NATO members are far greater. However, NATO has difficulty deploying even small forces. NATO, which fielded 40 divisions (about 360 combat battalions) in Northern Europe during the Cold War, strained to stand up four battalion task forces in the Baltic states.” 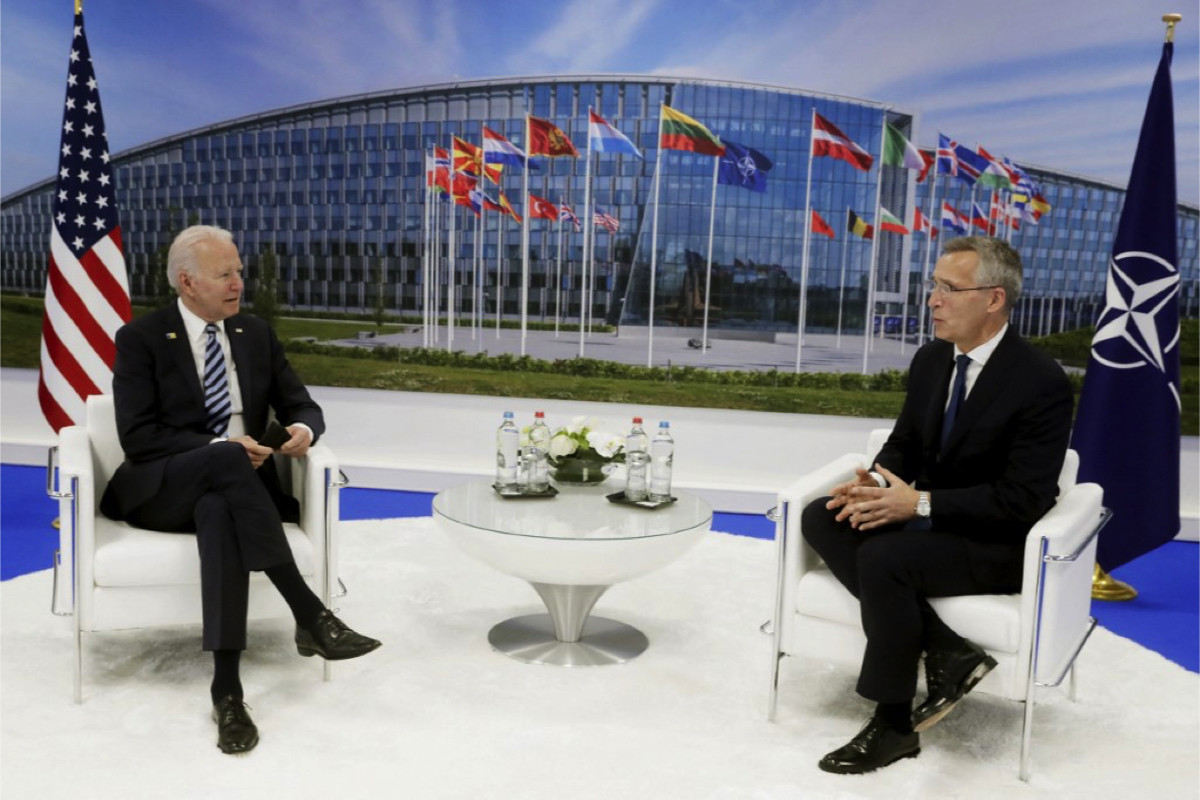 US President Joe Biden (L) and NATO Secretary General Jens Stoltenberg (R) meet during a NATO summit at the North Atlantic Treaty Organization (NATO) headquarters in Brussels on June 14, 2021. – The 30-nation alliance hopes to reaffirm its unity and discuss increasingly tense relations with China and Russia, as the organization pulls its troops out after 18 years in Afghanistan.

In other words, non-US NATO members are fairly combat ready. The question is who they see as a threat and against whom they are intending to use their armed forces. Clearly, if a whole chapter of the study has been devoted to Russia, then the country is not merely being suggested as a possible aggressor against which a collective defence strategy is needed, it is being presented as one. Therefore, opinions among non-US NATO members regarding Moscow’s ambitious and aggressive intentions need to be maintained in order to shape public opinion accordingly and obtain the necessary support from governments. Meanwhile, it has been shown that it is the armed forces themselves and the economic capabilities of these countries that are of significant interest to NATO. Since they can afford relatively high expenditures, they are a worthwhile acquisition for improving NATO’s overall capabilities.

Yet Sweden, for example, rightly considers NATO to have several weaknesses, such as dependence on America’s general strategy; overlapping responsibilities between NATO commanders, troop contributors and host countries that complicate a possible strengthening and enlargement; the relative weakness of members in the East; a lack of infrastructure in Europe that makes rapid troop movement and deployment problematic; and a lack of essential equipment in some countries.

The authors also note an issue with slow decision-making. It is obvious that enlarging the alliance will only complicate the process. Moreover, there have always been difficulties in choosing a political and military strategy in times of conflict. “In considering a concept for defense, NATO planners have long faced a difficult choice: maintaining a forward defense that holds territory but is potentially fragile or conducting a mobile defense that gives up ground initially and requires a later counteroffensive. Mobile defense has many militarily attractive features and figures prominently in discussions about maneuver warfare. However, the politics are difficult. Nations are loath to cede any territory to an adversary, even temporarily, even though a strategic withdrawal might make military sense. Further, counteroffensives inevitably expand the geographical scope of operations and often the political scope as well. These enlargements raise the stakes of a conflict and could induce the use [sic] nuclear weapons.”

Previous discussions on the issue have revealed a certain consensus within NATO that there should be a three to one advantage or even higher. There must also be a high level of expertise in training troops for mobile operations and a preparedness for civilian casualties and property losses. There is no evidence of this among NATO members, as shown by the exercises in recent years and NATO’s “effectiveness” in Afghanistan.

With regard to possible candidates for NATO membership, their potential and geopolitical importance are outlined as follows.

NATO has been holding annual joint exercises with Georgia since 2016 and maintains a permanent office in the country to “facilitate political/military dialogue in practical cooperation” between Tbilisi and Brussels.

Georgia is militarily inferior to Russian army units in the Caucasus by a ratio of two to one. Even with NATO involvement, there are at least two conditions that must be met for Georgia to be successful in a military operation against Russia. 1) The ability to move significant military forces quickly by air using military transport aircraft. 2) Turkey’s involvement in the conflict, including the deployment of military contingents on Turkish soil and their subsequent movement into Georgia by land and sea.

NATO is also counting on air superiority in such a conflict.

This proposed deterrence would also require serious measures: the deployment of a NATO division, a US division, and hardware and components for heavy equipment; and the permanent presence of US air defence forces.

Infrastructure, troop deployment and rotation, and military exercises will cost $7 billion a year. Half of this will be borne by the US and the other half by NATO’s European members.

Ukraine is more complicated. The report was published before the signing of agreements between Belarus and Russia on 9 September that also involve military integration, hence it does not take into account Belarus’s involvement in a potential conflict on the side of Russia. Otherwise, the estimates would have been different.

But again, the authors fantasise about Russian aggression and cite a simulated scenario in which Russian troops seize the eastern portion of Ukraine, encircling the Ukrainian military who will try to defend Kharkiv and a number of other cities in the east. Although the scenario has NATO air forces punishing Russian troops, they are unable to stop their advance. NATO would require three months to create the necessary conditions for a counterattack, but Russia would retaliate with tactical nuclear weapons.

Strengthening Ukraine’s security would require the permanent deployment of three brigades (one US and two NATO); the procurement and deployment of equipment; the deployment of an air defence brigade; and the presence of US instructors and a division staff (250 personnel), two US air squadrons and one NATO. All this would cost $27 billion.

The Donbas factor with Ukraine’s Russian-speaking population is also taken into account. The suppression of an uprising is expected to be a costly affair. Five years of “peacekeeping” would cost $98 billion, with a further $130 billion for five years of counterinsurgency activities. The experiences in Afghanistan and Iraq were taken into account when working out the estimates (most likely with an element of corruption benefiting US subcontractors).

With Bosnia and Herzegovina, the main problem is the Serb population and the position of Serbia itself. It is expected that an incursion will also have to be withstood, costing $24.6 billion. It is telling that, in the case of Bosnia and Herzegovina, the report talks as if the country is already a member of NATO and troops will have to be deployed there to maintain law and order.

With Sweden, the authors once again let their imaginations run wild. “In a NATO conflict with Russia, for example, during a Russian incursion into the Baltic states, Sweden would be deeply involved. Because Finland acts as a buffer against Russia, land attack is extremely unlikely. Instead, Sweden would have three defensive challenges: protecting itself from Russian air and missile attacks, securing its vast territory against Russian infiltration, and defending Gotland Island and other key infrastructure so that NATO military forces could use them to protect the flow of forces to the Baltic states and elsewhere.” This would require the advance deployment of aircraft and air defences to cover Gotland and a number of positions in Sweden, costing the US $3.2 billion, with NATO needing to add a further $6.4 billion.

It is noted that “[b]eyond the purely military challenges, Sweden faces a political-military challenge in joining NATO: NATO membership does not just guarantee Swedish territory against outside aggression – it also requires that Sweden become involved in other countries’ conflicts, something it has not done since the eighteenth century.” This will deter Stockholm from making such a decision.

Finland actively cooperates with countries in the West, including participation in manoeuvres with NATO and the US. It is assumed that the Finns have no interest in inviting foreign troops onto its soil for fear of provoking Russia. In order to somehow justify a conflict between Russia and Finland, the authors put forward a scenario involving occupation of the Aland Islands, which would force Helsinki to retaliate. But Finland does not have the necessary class of military aircraft nor the air defence system to stand up to Russia. And should NATO want to come to its rescue, it will take a long time owing to geography and distance. Minimum deterrence would cost a little over $1 billion, while a more qualitative strengthening would cost $5.3 billion.

But, as with Sweden, Finland will have to come to terms with its new role.

While the political solution and technical issues regarding new members are still hypothetical, the report clearly shows America’s intention not only to present Russia as a future threat to and enemy of Europe, but also to give the appearance of hopelessness and a lack of any kind of alternative for both NATO members and relatively neutral states alike.