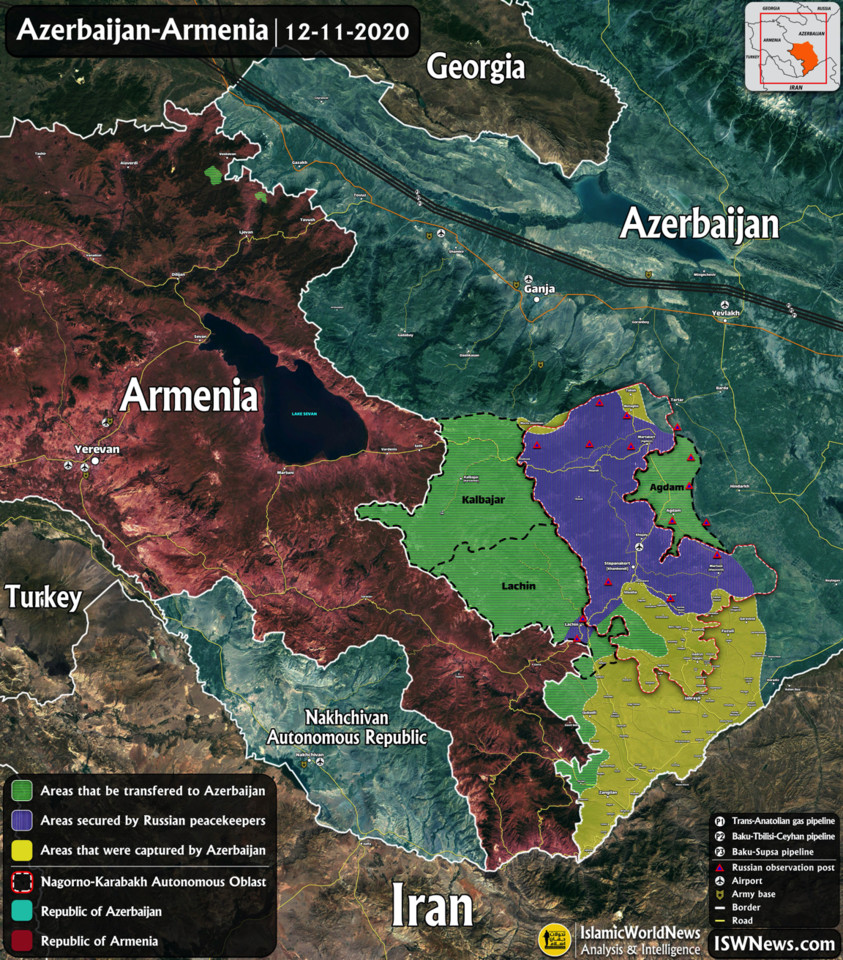 Key Takeaway: Russian President Vladimir Putin’s patient and precise diplomacy outmaneuvered Turkish President Recep Tayyip Erdogan in Nagorno-Karabakh. The Kremlin produced the most significant breakthrough in the disputed zone since 1994 with a Russian-brokered agreement on Azerbaijani terms. Putin and Azerbaijani President Ilham Aliyev will likely capitalize upon their respective victories as Erdogan fails to gain a greater Turkish footprint in the Caucasus.

Russia’s upset victory upends Turkey’s calculus in Nagorno-Karabakh. Azerbaijan owes its rapid military success in Nagorno-Karabakh to Turkey’s strong backing with arms sales, Syrian proxy deployments, and diplomatic support.[1] Turkey’s patronage likely came with strings attached, despite the Turks’ friendly relations and historical kinship with Azerbaijanis. Ankara likely saw the conflict as a low-cost opportunity to solidify a Turkish foothold in the Caucasus while gaining an advantage over Moscow and potentially replacing Russia as Azerbaijan’s key patron. Azerbaijan’s and Turkey’s insistence on Armenian withdrawal from Nagorno-Karabakh was likely the key obstacle to the previous ceasefires attempts—leading Erdogan to calculate that he was holding the reins of the conflict and could control its end. Putin seized those reins with the November 9 agreement by forcing Armenia to surrender to the Azerbaijani demands under exclusive Russian control over the implementation process.

Aliyev delivers long-awaited victory at a high price. The Russian-brokered agreement will end Armenia’s military presence in Nagorno-Karabakh and its surrounding regions of Azerbaijan by December 1—making Azerbaijani President Ilham Aliyev the leader to reclaim Azerbaijan’s territories lost during his father’s presidency in 1994. The agreement does not mention Baku’s key ally Ankara, despite earlier discussions of a joint Turkish-Russian peacekeeping presence in Nagorno-Karabakh.[2] Aliyev will likely enjoy domestic popularity from his Kremlin-delivered victory, but he now faces new challenges with the first Russian military presence in Azerbaijan in many years and likely damaged relations with Turkey.

Putin is the clear winner of the upset victory in Nagorno-Karabakh. The Kremlin achieved multiple crucial objectives by brokering the November 9 peace agreement between Azerbaijan and Armenia.


Putin outmaneuvered Erdogan as Turkey failed to cash in its military success for long-term gains. The Russian-brokered agreement likely shocked Ankara. Putin compelled Yerevan to accept this defeat by taking advantage of Armenia’s dependence on Russian military power to withstand the Turkish-backed Azerbaijani push. His decision to do so was a clever gambit. He sacrificed some goodwill and trust in Armenia by failing to come to its aid and then imposing this humiliation on it, but Yerevan has nowhere to go—no other power or group of states can defend Armenia from Turkey or Azerbaijan. Had Putin instead rallied around his Armenian allies, he could have stopped or reversed the Azerbaijani gains, but at the cost of driving Azerbaijan much more firmly into the Turkish camp. Erdogan likely miscalculated Putin’s willingness to sacrifice an ally temporarily to make a bigger, longer-term gain.

Erdogan is unlikely to be able to reverse this setback any time soon. He may push for a limited diplomatic role in future resolution processes, but the agreement underscores the asymmetrical nature of the Russia-Turkey relationship. Russia’s timely diplomatic maneuvering and swift negotiation reversed Turkey’s gains in courting Azerbaijan and establishing a Turkish foothold in the Caucasus. Turkey’s limited gains include a land corridor to connect Turkey to Baku over the autonomous Azerbaijani territory of Nakhichevan and a symbolic Azeri-Turkish victory that Erdogan will likely benefit from inside Turkey.[6] The success of Turkish Bayraktar drones will likely increase the demand for Turkish military exports as well. But those gains are far short of what Erdogan was likely expecting in return for the risks he courted in this conflict, and they are outweighed by the establishment of a Russian military position in Nagorno-Karabakh.

The war in Nagorno-Karabakh ended on Russia’s terms 36 years after another Russian-brokered ceasefire: Putin scored a major long-term gain for Russian strategic objectives in the Caucasus while showcasing Russia’s stronger diplomatic vigor and experience over Turkey’s. Turkey failed to influence the conflict’s end despite its significant military success in backing Azerbaijan. Putin’s upset victory in Nagorno-Karabakh will have profound effects on the future of two former Soviet states in the Caucasus and Turkey-Russia competition across multiple theaters.