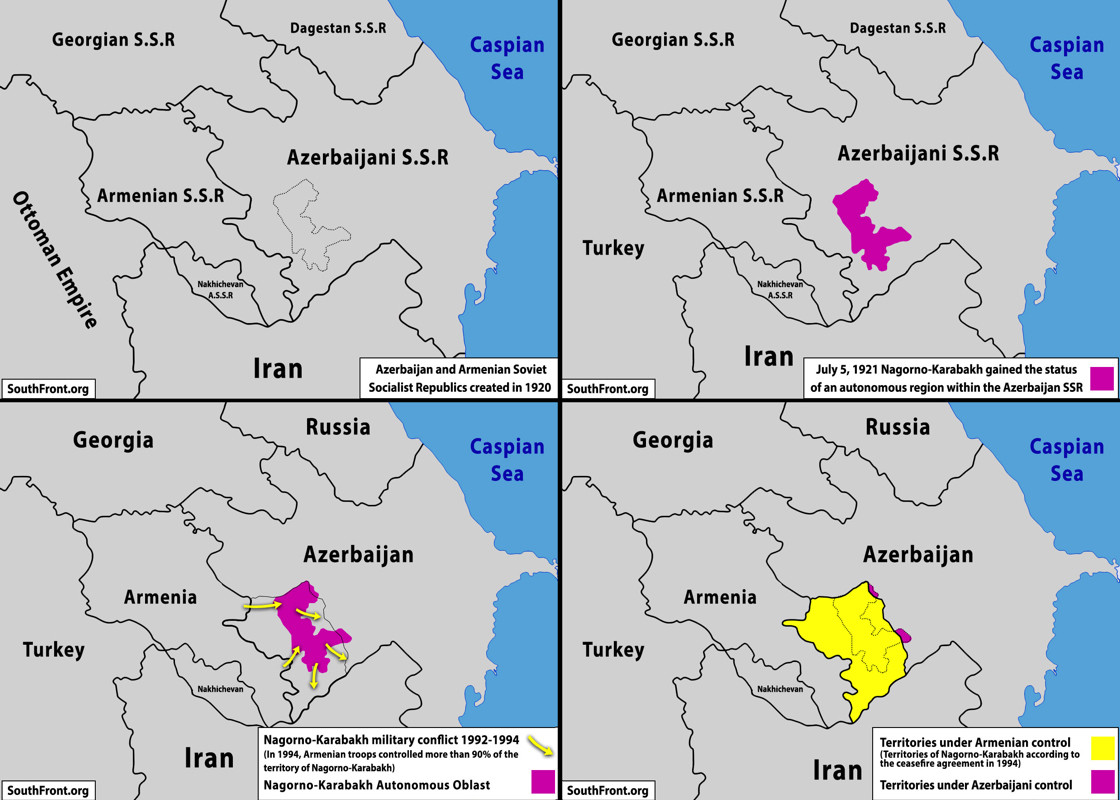 Nagorno-Karabakh is an administrative territorial entity located in the Transcaucasus between Azerbaijan and Armenia. It is a self-proclaimed Republic that is not recognized by any UN member state. The only formal recognition of Nagorno-Karabakh independence comes from three other self-proclaimed countries – Abkhazia, South Ossetia, and Transnistria.

The administrative center is Stepanakert (Khankendi in Azerbaijani).

In February 2017, the Nagorno-Karabakh Republic officially changed name to “Republic of Artsakh”.

Since 1921, the region was part of the Azerbaijan Soviet Socialist Republic as an administrative territorial unit with the rights of broad autonomy. In 1923, it received the status of an Autonomous region (NKAO) within the Azerbaijan SSR.

In 1987, 75 000 signatures of Nagorno-Karabakh citizens for reunification with Armenia were sent to the Central Committee of the Communist Party of the Soviet Union. It provoked a negative reaction from Azerbaijani authorities. The next year the regional Council of the NKAO asked the Supreme Soviet to consider transferring the region to Armenia, but this request was seen as a manifestation of nationalism. In four months, the regional Council made one more attempt and declared its secession from Azerbaijan. In response, the Presidium of the USSR Supreme Soviet adopted a resolution denying the possibility of transfer.

After the attempts at peaceful transition failed, since September 1988, armed clashes began between Armenians and Azerbaijanis, which turned into a protracted conflict.

On September 2, 1991, the region was proclaimed to be the Nagorno-Karabakh Republic (NKR) as part of the USSR. It included the territories of the NKAO, Shaumyan district, and part of the Khanlar district of Azerbaijan.

This marked the beginning of an open armed confrontation between Armenia and Azerbaijan for control of the region in 1991-1994. The Karabakh conflict was the first major armed confrontation on the territory of the former Soviet Union. After to the collapse of the USSR, Soviet internal troops were withdrawn from the region. The situation in the conflict zone went out of control.

The fighting escalated in may 1992, when the self-defense units of Karabakh took control over the city of Shusha, from which Azerbaijani troops regularly bombarded Stepanakert and surrounding villages.

Armenian forces broke the Azerbaijani blockade in the area of Lachin, establishing communication between Karabakh and Armenia (“Lachin corridor”). Azerbaijani troops established control over the Northern part of the NKR. In the spring of 1993, Karabakh forces, with the support of Armenia, created a second corridor linking the NKR with the Republic.

In 1994, the NKR defense forces established control over the 90% of the former NKAO territory and also occupied fully or partially seven border regions of Azerbaijan (8% of the territory of Azerbaijan). In turn, Azerbaijan retained control over parts of the Martuni, Martakert and Shahumyan districts of the NKR. According to various estimates, the losses of the Azerbaijani side during the conflict ranged from 4 to 11 thousand killed, and the Armenian side from 5 to 6 thousand people.

On May 5, 1994, a ceasefire agreement, known as the Bishkek Protocol, was signed by the parties with the mediation of Russia and Kyrgyzstan. The document entered into force on May 12, 1994.

Since the signing of the Bishkek Protocol in 1994, the parties have repeatedly accused each other of violating the ceasefire, and there have been numerous local incidents involving the use of firearms on the border.

The situation in the Nagorno-Karabakh conflict zone escalated sharply in 2014 and 2016, but the region has not faced armed conflicts like today’s war since 1994.