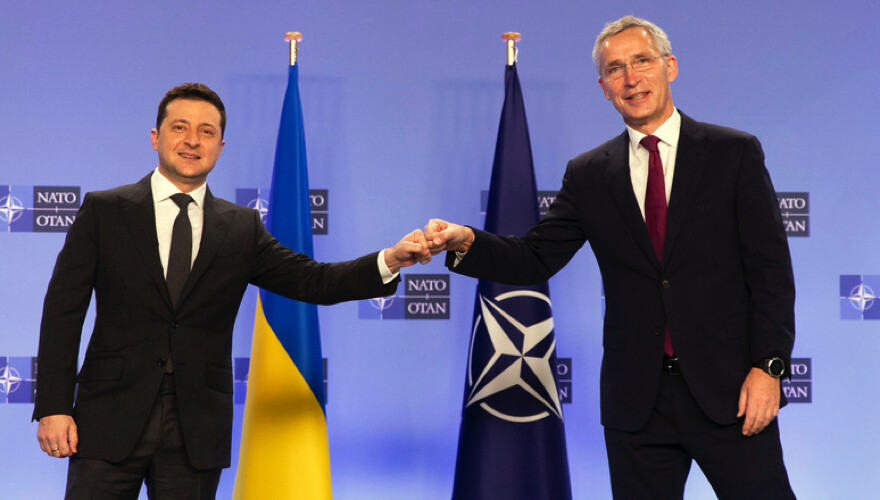 A strong, independent Ukraine is vital for the stability of the Euro-Atlantic area. Relations between NATO and Ukraine date back to the early 1990s and have since developed into one of the most substantial of NATO’s partnerships. Since 2014, in the wake of Russia’s illegal annexation of Crimea, cooperation has been intensified in critical areas. Since Russia’s full-scale invasion in 2022, NATO and Allies have provided unprecedented levels of support.
in "Relations with Ukraine". NATO Site. Last updated: 28 Oct. 2022 15:54.

By Batiushka for the Saker blog
The Vineyard of the Saker • November 24, 2022 • Has Readers' Comments • Original Here

Introduction: The Atlantic and Europe

Judging by its name, NATO, the North Atlantic Treaty Organisation was only ever about the USA and the UK, an agreement between Americans and the half-American Churchill. After all, what relevance does the 'North Atlantic' have to Baltic Germany or Mediterranean Italy, let alone to Aegean Greece and Black Sea Turkey? Even Spain and Portugal look towards the Caribbean and the South Atlantic, not to the North Atlantic. NATO is clearly an organisation that descended directly from the Atlantic Charter, made up by Roosevelt and Churchill in a bay off Newfoundland in 1941 (not even in the Atlantic), and then imposed on all the others.

The End of NATO

So, whatever was the North Atlantic doing in the foothills of the Himalayas, in Afghanistan? Apart from the fact that that was its greatest defeat (so far), just what was it doing there? And what is the North Atlantic, or at least parts of it, doing in the South China Sea? Surely there is a clue in the name – China? It belongs to China. Whatever are the US Navy and others doing there?

Surely, even the geographically-challenged Liz Truss, who wanted the whole world to be ruled by NATO, must have been thinking that it was time to rename NATO? Perhaps the Nazi American Tyranny Organisation? Like that you could keep the same initials. As the Saker has pointed out, the first NATO Secretary-General, the Indian-born colonial, General Hastings (note 1) Ismay, bluntly admitted that the purpose of NATO was ‘to keep the Soviet Union out, the Americans in, and the Germans down’ (note 2).

And as the Saker has explained: ‘Keep the Germans down’ means crush all Europeans who might be rivals to the Anglosphere’s control of Western Europe, and now control all of Europe, apart from the free Russian Lands. ‘Keep the Americans in’ means crush all European liberation movements, De Gaulle’s or any others. ‘Keep the Soviet Union out’ means destroy Russia, so that it does not liberate Europe from the tyranny of the Anglosphere. The latter is symbolised by the US and British flags that have been omnipresent, even on fashion items, T-shirts and jeans, ever since the 1960s. That is why true Europeans refuse to wear such items.

Interestingly, the answer to the aggression and bullying of NATO (the American elite always bullies), the Warsaw Pact was named after the Capital of Poland. Ironically – and there is nothing so ironic as history – today it is in the Warsaws of the ‘New Europe’, far from the North Atlantic, that you will find the most fanatical latecomer-devotees of NATO. What is the significance of NATO?

The American Republic of Poland

It is part of the Poles’ gigantic inferiority complex (imagine living among a lot of fields between Germany and Russia) to imagine that Russia is interested in conquering Poland. Russia is really not interested in Poland. So, I hear you say, why did Imperial Russia participate in the three late 18th century Prussian and Austrian partitions of Poland? Why did Molotov and Ribbentrop partition it? Why did Stalin occupy it?

The answer is always the same. When you have been invaded by Western Europe as often as Russia has, you need to create a buffer-zone to protect yourself. As geography does not change, the Tsars and the Bolsheviks were forced by the same Western aggression and jealousy into doing the same thing – protecting themselves and that meant Eastern or all of Poland. In this, Tsar Nicholas II was a lot more successful than the Bolsheviks. Thus, in World War I, the Germans and Austrians never got into Russia at all, getting stuck mainly in eastern Poland and Lithuania and causing fewer than 670,000 Russian victims in two and a half years of war. It was a different story in World War II, with the Germans reaching the Volga and forty times more victims, 27 million of them.

This is an explanation, not a justification. Some of my best friends are Polish: though they belong to the small minority of Poles who know all the above and know that Poland today is merely an American vassal. I think they probably also know that if ever a Pole were to win the Nobel Peace Prize, it would be for one who had led Poland into making peace with Russia, rather than making war. That would be a Pole who pulled the plug on the Americans, chased them out of Poland and declared independence. And he would do the same with the US-run EU, the United States of Europe. Now that is the sort of Polish patriotism (utterly different from Polish nationalism), of which I approve, as it is concerned with asserting Polish national identity, not destroying it.

Sadly, there are those in today’s Polish political elite and military who dream of wiping Russia off the map, like medieval Catholic crusaders. They are just as delusional as those crusaders were. The Poles do not realise that the Americans (and the British) will drop them (and the Ukrainians) like hot bricks, when it comes to crunch. Just as they did in 1945, even though the British claimed that they had gone to war in 1939 only for the sake of defending Poland. That too had been a lie. When will the Poles ever learn who their real friends are? As the Saker has said: ‘The US/NATO do not have the manpower or firepower needed to take on Russia in a conventional combined arms war. Any use of nuclear weapons will result in immediate retaliation’. Today at least 1 in 33 people in Poland are Ukrainian ‘refugees’. A lot of Poles are fed up with that invasion. It is putting a great strain on the country.

At this very moment NATO is being demilitarised in the Ukraine. Ironically, the Ukraine is officially a Non-NATO country and one that contains some of the most Polish-hating people in the world. The Ukrainians who live on the Polish border (Galicians) even invented a new religion so that they would not be Catholics like the Poles (or Orthodox like the Russians). It is called ‘Greek Catholicism’. A weirder and more artificial mixture than that you will not find. As the Russians say: ‘Neither fish, nor meat’. So what happens when NATO collapses? Let us go back into the history of the last century, so much of which involved Poland, from Nazi-devastated Warsaw to Soviet-liberated Auschwitz, from Wroclaw (Breslau) to Gdansk (Danzig).

By the start of 1917, World War I had lasted for two and a half years and Russia was only a few months away from total victory and liberating Vienna, Berlin and Istanbul. However, the British-organised February Revolution (the then British ambassador, Sir George Buchanan, was the Victoria Nuland of a century later) put paid to it. And the utterly incompetent but Anglophile aristocrats the British had chosen to run Russia opened the floodgates to the October Revolution. Without British meddling, there would have been no Poland which between 1919 and 1920 occupied most of Belarus and Western Ukraine and stayed there until 1939. And if Russian troops had entered Vienna, Berlin and Istanbul, there would have been no Austrian corporal who in 1939 created the second part of World War I. And so no US invasion of Western Europe in 1944. And so no Soviet troops entering Vienna and Berlin in 1945 with violence. And so no war for the liberation of the Ukraine today.

The Austrian intrigues which helped lead to World War I played into the hands of the French and the British and destroyed the Saint Petersburg-Berlin axis. This was tragic because Berlin is the real centre of Western and Central Europe and everything else falls into place behind it, including Paris. (All Germans have to do to ensure their de facto leadership is to flatter the vanity of the French elite and tell them how important they are, that is enough). For harmony between Berlin and Saint Petersburg means harmony all over Western, Central and the northern part of Eastern Europe. Leaving aside Western Europe, there are also whole parts of Eastern and Central Europe which Russia is not interested in, because those Eastern and Central European cultures are alien to the Russian mentality and closer to German history and culture. These include, obviously, ex-Protestant Eastern Germany, as well as ex-Catholic Poland (including a slither of what is for the moment the far western Ukraine), Slovakia, Austria, Hungary, Slovenia, Croatia and northern Bosnia-Herzegovina, as well as atheist Czechia.

Once you remove those countries from the equation, you come to those parts of Eastern Europe which Russia is interested in and feels closer to. These are: Belarus, the (Russian) Ukraine, the Baltics, Moldova, Romania, Bulgaria, Serbia, southern Bosnia-Herzegovina, Montenegro, North Macedonia, Albania, Greece, Cyprus. You will be able to see why they belong to the Russian cultural world if you have a look at Samuel Huntingdon’s map of ‘The Eastern Boundary of Western Civilization’ (sic) (3). As the ethnocentric Professor says: ‘Europe ends where Western Christianity ends’. Here Russia will not need to build a wall, put up barbed wire and cement tank traps. It has friends on the other side of the border.

This was Stalin’s mistake – to create a Russian buffer zone which included countries whose majority culture was alien to the Russian, as listed above, instead of only those countries towards the south and east, as listed above. As an atheist Stalin had no more time or understanding for religious and cultural distinctions than modern Americans. A pity. South-eastern Europe, the above list of countries, will once more enter into the Russian sphere of influence, but those to the north and west belong elsewhere, the German and so Western European sphere.

As NATO continues its collapse, which began in Kabul in August 2021, it will be clear that the US cannot hold on to Europe, just as it cannot hold on to Asia. The NATO wars will soon be over. NATO is being demilitarised and denazified now. In fact, it is being abolished now. Once the Berlin-Moscow axis has been re-established, the rest of Europe will follow, not into a Russian sphere of influence, but into an area which will want to form good relations with Russia, even the ex-American Republics of Poland, Lithuania, Latvia, Estonia and American Britain. This is because behind Moscow, lies Beijing and indeed the whole of Eurasia. And all of Europe needs both Beijing and Moscow, Beijing for manufactured goods, Moscow for energy. Europe is to return to its roots, turning its back on transatlantic irrelevance and meddling. That is soon to be its past. As the good Colonel said: ‘To hell with Washington’.

Notes:
1. Naturally, Ismay was named after the greatest defeat in the history of the English people, Hastings. That is, after the greatest victory in the history of the Norman/British Establishment. And naturally, in 1947, General Ismay was given the Norman title of Baron for his service to the same Norman Establishment.
2. Lord Ismay.
3. The first map in Chapter 7 of his book ‘The Clash of Civilizations’.

The European Plain marked in grey,