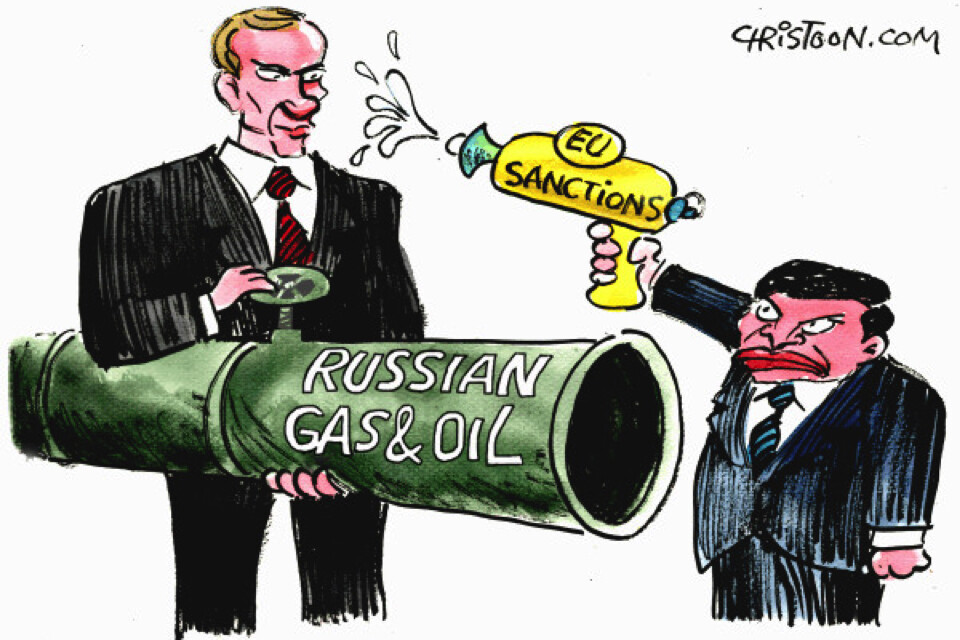 American and Western policy towards Russia is founded on two serious errors. (A considerable understatement, of course – the past thirty years show that conventional Western ideas of Russia are almost completely wrong.)

But these two are endlessly repeated and, no matter how many times they are proven wrong, they remain the foundational assumptions of the West's attempts to change or control Russia.

First is the idea that the Russian economy is feeble, unbalanced and dependent on income from the West. The second is that Putin is the chief of a band of thieves who, who if made to feel pain, will get rid of him. Sanctions will collapse the first and bring the pain to cause the second. (Another delusion is that once Putin goes, everything will be to the West’s liking – but I did say there was a multitude of misconceptions.)

First let’s consider Russia’s economy. Op-eds that say that the Russian economy is the size of Texas or Belgium or Luxembourg or whatever simply translate rubles into dollars and gallop to their preassigned conclusion. They never ask how big the space program of the country Russia is compared to his, or how many nuclear submarines it makes, or new subway stations, airports or bridges it opens, or whether that country makes all kinds of airplanes and trucks, or how much food it grows and exports or anything else that actually measures a real economy.

As soon as they did, of course, they would see that the Russian economy is much bigger than the puerile ruble-dollar comparison suggests. And, a slightly closer look would reveal that Russia’s economy is almost self-sufficient. But the West carries on confident that Russia is a “gas station with nuclear weapons” and its feeble economy can be easily collapsed. RAND based a whole strategy on Russia’s greatest vulnerability… is its economy, which is comparatively small and highly dependent on energy exports.

They persist in the face of all experience to the contrary. The EU cut food exports to Russia to, I suppose, bring people out into the streets protesting the disappearance of exotic cheese (remember Masha Gessen’s heartbreak about my little cheese?) Russia responded intelligently and is now self-sufficient in food and Europe has lost that market. Biden was going to reduce the ruble to rubble but Moscow effortlessly countered him and the ruble is now tied to energy – one of the strongest foundations a currency can have.

And still the sanctions pile on. But it’s educational – now we know a lot more about what potash is used for and where it comes from. And neon – who knew that was important? Rare earths! Beer bottles! Moscow is only just now starting to counter-sanction and the world is discovering that Russia is a major producer of a lot of important things and if you sanction them, you will find yourself running short of lots of things you’d never heard of. (You’d think anyone who owned an atlas would be able to figure out that a country as large as Russia must be a big producer of most resources).

Biden can blame Putin all he likes, but sanctioning energy and potash is a certain way to drive up prices all round. Biden used to think that Russia had “nuclear weapons and oil wells and nothing else”. Maybe the people running Russia are better at thinking things out and seeing reality than we thought they were. (Yet another mistaken Western assumption – what is there in the last twenty years that suggests we’re smarter than they are?)

The idea that Russia is a big criminal conspiracy and Putin is the Boss of Bosses is the foundation of the personal sanctions strategy. So-and-so is deemed “close to Putin”, whatever that means, and he’s prevented from going to Paris to buy cheese and his yacht is stolen confiscated. Angry, he sits down with the other capos and decides it’s time the Boss was found face down in a bowl of kasha and blood. The think tankers tell us that Putin is the Chief Thief holding onto power by spreading the loot around, fake elections and making critics disappear. (By the way, wasn’t he supposed to have tried to kill Navalny, where’s the oped savant explaining why he’s still alive?)

All elections in Russia are fake, all opinion polls are fake, all media is controlled by the Kremlin, the underbosses are hurting so why is Putin still there? It surely couldn’t be that he is the very popular and respected elected head of state – to suggest that would be to call into question three decades of US and EU think tankery. Therefore he must be just one more sanction away from being whacked out. And so more names – all “close to Putin” – are added to more lists. But nothing changes.

These two errors run on and on. Russia is now the most sanctioned country ever and Western politicians still think another round of “tough sanctions” will do the job. But the more sanctions it survives, the more sanction-proof Russia becomes.

Wars are irruptions of brutal reality into fantasy and the Ukraine war is laying bare the empty complacency at the root of the West’s view of Russia. It’s going to be a cold hungry winter in Europe and in parts of America. Can’t blame Putin forever.

But the depressing truth is that minds are rarely changed, you have to change the man. How much longer will the West’s leaders outlast their repeated failures?

First it leads to overestimating oneself and understimating the enemy.

As judgement is compromised, stupid decisions are made.

The supremacists are unable to honestly and groundedly asess the stupid decisions they made, so they double down and deflect.

With each iteration of this cycle, stupidity grows more and more ingrained.

It seems Russia & Russians are being slandered in the same way Caucasians (esp men) are in US/Canada or participants/supporters of Trucker Convoy or those not accepting of official State narratives. Genocide always starts that way:
1. Classification: People divided into "us & them"
2. Symbolization: People FORCED to identify themselves
3. Discrimination: People begin to face systemic discrimination
4. Dehumanization: People are equated with animals, vermin or diseases
5. Organization: Gov't creates specific groups (police/military) to enforce policies
6. Polarization: Gov't creates propaganda to turn public against target group
7. Preparation: Official action to remove/relocate people
8. Persecution: Beginning of murders, theft of property, trial massacres
9. Extermination: Wholesale elimination of target group. It's not considered "extermination" or murder because target group are NOT considered human
10. Denial: Gov't denies it has committed any crime

IMHO we're at stage 6 at least, as steps 1-5 have already been played out over the last 2+ years

Don't agree? Well that's because you don't believe men can be that depraved. I hold no such delusion…