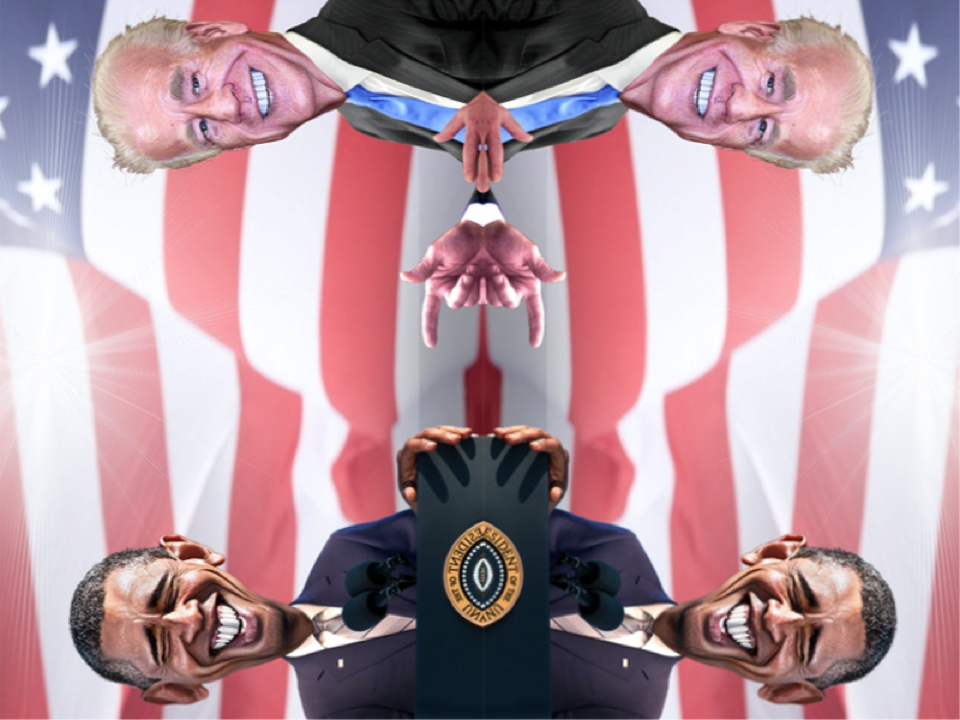 Based on DonkeyHotey’s “Obama Biden 2012” cartoon.

The Return of the Democrats

and the Undead Past

By Martin Sief at Strategic Culture Foundation on November 2, 2020.

The partisan swallowing of ridiculous anti-Russia conspiracy theories by Democrats in Congress added to Hunter Biden’s truly sleazy business adventures in Ukraine have created an exceptionally dangerous brew to threaten and demonize Russia if former Vice President Joe Biden wins the U.S. national election on November 3. All the curses and bungles of America’s past 20 years will rise up anew to threaten the nation’s entire future.

If Joe Biden wins the election, we face an unprecedented situation in U.S. and global affairs since the beginning of the Atomic Age in 1945-49:

The problem is far deeper and more dangerous than any personal problem with Biden or his apparently sleazy son (Hunter Biden’s business dealings with both Ukraine and China cry out for serious honest congressional inquiries in the interests of sane and disinterested U.S. future relations with China and Ukraine – as well as with Russia.)

The real problem is that for eight years the Obama administration, in which Joe Biden was the putative Number Two figure engaged on a Helter-Skelter, crazed descent towards mindless confrontation with Russia and also institutionalized a reckless and plain wicked policy of toppling governments around the world in straight defiance of international law.

The true architect of these policies was neither Obama nor Biden but their first secretary of state Hillary Clinton. It was she who ordered the CIA to collect DNA samples of Latin American national leaders, an unprecedented seven of whom contracted cancers, some of them exceptionally rare and virulent, including two democratically elected presidents of Brazil and the late democratically elected president of Venezuela Hugo Chavez who died of his.

Clinton also unleashed the dogs of chaos and war across the Middle East by approving the undermining and successful toppling of the government of Libya and the undermining although unsuccessful efforts to topple the government of Syria. This unleashed a ferocious civil war, the greatest catastrophe the Middle East has seen since Iraq’s attack on Iran in 1980, also at the time recklessly supported by an ignorant and incompetent president Jimmy Carter.

Carter, like Obama after him was ludicrously ignorant of international affairs. Both presidents allowed themselves to be led by the nose through the region by Zbigniew Brzezinski who served as Carter’s national security adviser. Brzezinski’s eagerness to embrace and support the very worst Islamist genocidal extremist groups was exceeded only by his lifelong, unwavering hatred of Russia and all Russians.

Clinton was succeeded as secretary of state in Obama’s second term starting in January 2013 by a far more experienced, restrained and responsible figure, Senator John Kerry. Kerry rightly worked hard and well with Russian Foreign Minister Sergei Lavrov to prevent the reckless and destructive policies of the rest of the administration from totally destroying constructive communications between Washington and Moscow.

But Kerry could not control even his own State Department. He proved utterly unable to rein in the neo-conservative and neo-liberal super-hawks with whom Clinton had seeded the State Department led by Assistant Secretary of State for European and Eurasian Affairs Victoria Nuland. They joined forces with crazed right wing warmongers like the late Senator John McCain (now sanctified, but whose uncontrollable screaming rages were legendary in his days on Capitol Hill).

Together with ambitious plotters in the European Commission in Brussels they manipulated the toppling of the stable, democratically elected government of Ukraine in the 2014 violent Maidan coup in Kiev. McCain and Nuland actually addressed the violent revolutionaries and openly exhorted them to topple their own democratic and previously peaceful government.

The Kremlin moved – in reality with careful and considered restraint – to safeguard the democratically expressed wishes of the population of Crimea to rejoin Russia, and of the Russian ethnic majorities in the eastern provinces of Ukraine. But the Obama administration joined forces with the openly neo-Nazi movements that had seized undemocratic control in Kiev.

Over the following six years to the present, successive U.S. congresses have voted enormous sums of financial aid and sophisticated weapons systems to be sent to Ukraine with the express purpose of killing Russian soldiers and Russian-supported forces. It is no wonder that false and entirely undocumented reverse accusations have now been against Russia by the very same individuals who have supported the forces of violence, revolution and aggression for so long in Ukraine.

President Donald Trump, to his great credit, ran on for election in 2016 on a policy of reducing tensions with Russia and restoring a state of stable coexistence with the other main thermonuclear power on the planet. At no point did he advocate stripping the United States of its defenses.

On the contrary, Trump doubled up on Obama’s unprecedented more than $1 trillion nuclear weapons modernization program. He expanded spending on both conventional and strategic weapons on the biggest scale seen since the Reagan-Caspar Weinberger buildup 40 years before.

Nevertheless, Trump was then subjected to the most unfounded, ridiculous political witch hunt against a sitting national leader in U.S. history – at least since President John Kennedy was openly and repeatedly accused of treason for seeking to reduce the dangers of nuclear confrontation after the Cuban Missile Crisis.

Through all of this, hatred and unreasoning accusations against Russia were accompanied by attempted efforts even to destroy the property and economic security of the Russian people. Congress imposed punitive sanctions (they failed completely) with Democrats taking the lead.

Why revisit all this history? It is because, as the great and wise American novelist William Faulkner understood, “The past is not dead. In fact, it’s not even past.”

If the Democrats regain power in Washington, they will return with all the dire and insanely dangerous policies and obsessions they displayed for eight years under Obama and Biden. But those hatreds and prejudices will be superheated by four years of Russiagate fantasies and raving accusations against Russia unsupported by any serious evidence. Indeed, they have been coolly exposed and refuted indeed by many courageous and principled former senior U.S. officials and scholars.

Nevertheless, this Undead Past will rise up, more terrible and destructive than any fantasy of werewolves and zombies, to demolish our Present and horrifically curse our Future.