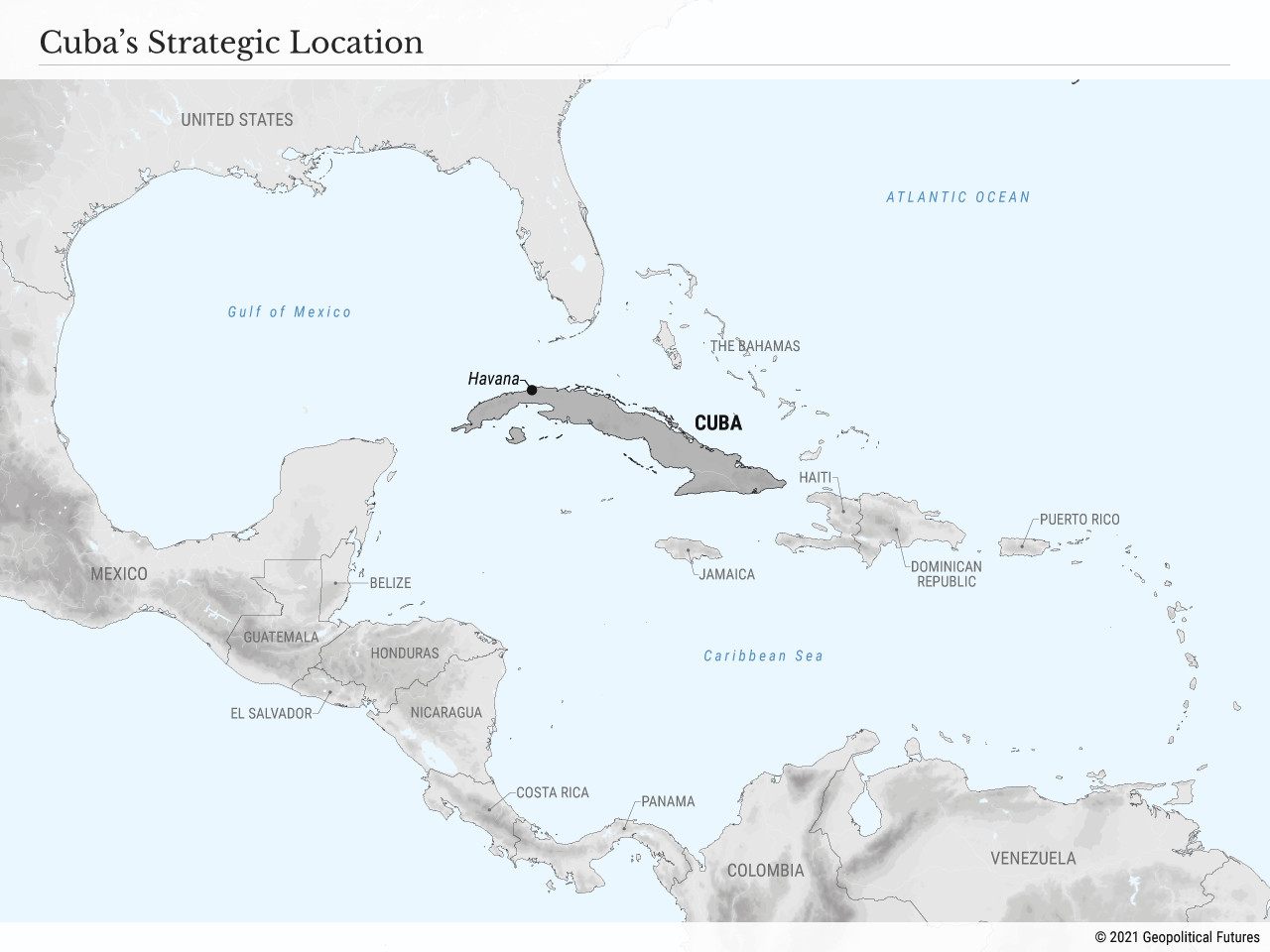 What’s at Stake in Cuba’s Protests

They could well be a test the likes of which Havana has never seen.

By Allison Fedirka at Geopolitical Futures on July 14, 2021

Thousands of Cubans took to the streets across the island on July 11 to protest the economy and their living conditions, both of which went from bad to worse during the COVID-19 pandemic as tourism, foreign direct investment and remittances plummeted. It was a momentous event for a few reasons. First, they were the largest single-day protests since the communist government took power more than 60 years ago. Second, they took place in a variety of cities at roughly the same time, suggesting they were coordinated to some degree. Last, they were months in the making, having risen at least in part from opposition movements in 2020.

Equally significant is how the protests fit into Cuba’s future. Since Cuba’s economy depends on foreign patrons, economic crises bring the country’s entire geopolitical alignment into question. They draw in long-standing political rivalries both inside the island and among world powers such as the United States, Russia and China, so the government’s staying power will to some degree hinge on an outside patron’s willingness to intervene.

To understand the current bout of unrest, it’s instructive to look at an earlier outpouring of discontent. In the 1990s, Cuba went through what was called the Special Period, a severe economic downturn brought on by the collapse of its benefactor, the Soviet Union. From 1989 to 1993, Cuba’s economy contracted by nearly 35 percent, and the country’s fiscal deficit rose from 7.3 percent to 33.5 percent of gross domestic product. The usual tensions were made worse by flocks of Cubans leaving the island for the United States. It was a bad look for the government, so it began to detain U.S.-bound boats, leaving large crowds of Cubans marooned on the coast of Havana. The crowd eventually erupted into a protest known as the Maleconazo. Fidel Castro himself accompanied security forces to quell the unrest, and order was soon restored. Less than a week later, the government loosened restrictions on citizens’ travel, resulting in an exodus of tens of thousands. 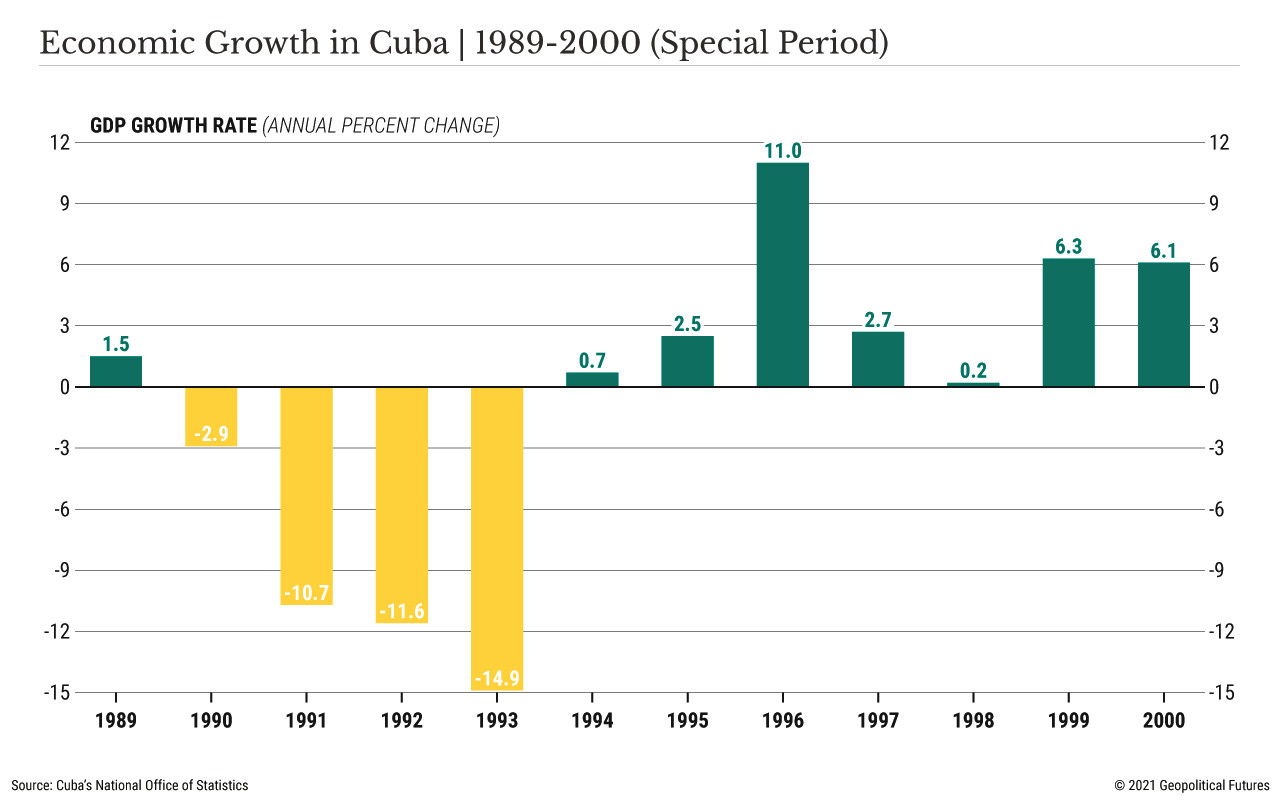 The similarities between then and now are striking. In both instances, the economy was deteriorating before a seminal event (the collapse of the Soviet Union, the COVID-19 pandemic) made things worse. Both events severely disrupted trade flows and the government’s access to hard currency and thus constrained imports to the island. As a result, there were widespread shortages of basic goods and input materials for industrial activity.

Internal problems in the countries on which Cuba relies for energy (the Soviet Union and, now, Venezuela) led to sharp declines in energy supplies. Without the imported fuel and industrial materials, economic activity on the island ground to a near halt. Fuel shortages eviscerated agricultural production. In other words, the Maleconazo clearly laid out what would compel Cubans to large-scale, public unrest, and those drivers are here in spades today.

Of course, the government in Havana survived the Special Period, but things are different this time around. Castro was saved in part by increased tourism and related FDI, the emergence of Venezuela as an oil and economic patron, and a series of economic moves that eased some of the public pressure. President Miguel Diaz-Canel had known of the coming downturn and so began to make some economic reforms to salvage the economy, for example by loosening rules to create more self-employment opportunities, introducing fines over price speculations and ending foreign exchange transactions at airports. Rather than deny a problem exists, he meant to tackle it head-on, or at least as incrementally as the Cuban system can stand. Just last month Diaz-Canel acknowledged the inflow of hard currency had declined by $2.89 billion in the past two years. He also acknowledged that despite the government’s best efforts, food imports this year were not enough to satisfy demand. True to form, he also blamed the economic downturn on the U.S. blockade and other anti-Cuban measures.

In other words, many economic levers have already been pulled, and there are limits to how much more can be done without overhauling the system. Hard currency is not expected to return any time soon to the island as tourism still falters over health concerns. (In the first five months of 2021, only 88,000 tourists arrived on the island.) And the risks of FDI are higher now because every country is suffering economically because of COVID-19. (There’s also higher risk because the U.S. has said it is going to start targeting property lost by Americans in Cuba during the nationalization campaign, putting hotels, ports and other areas linked to tourism at risk of U.S. sanctions.) 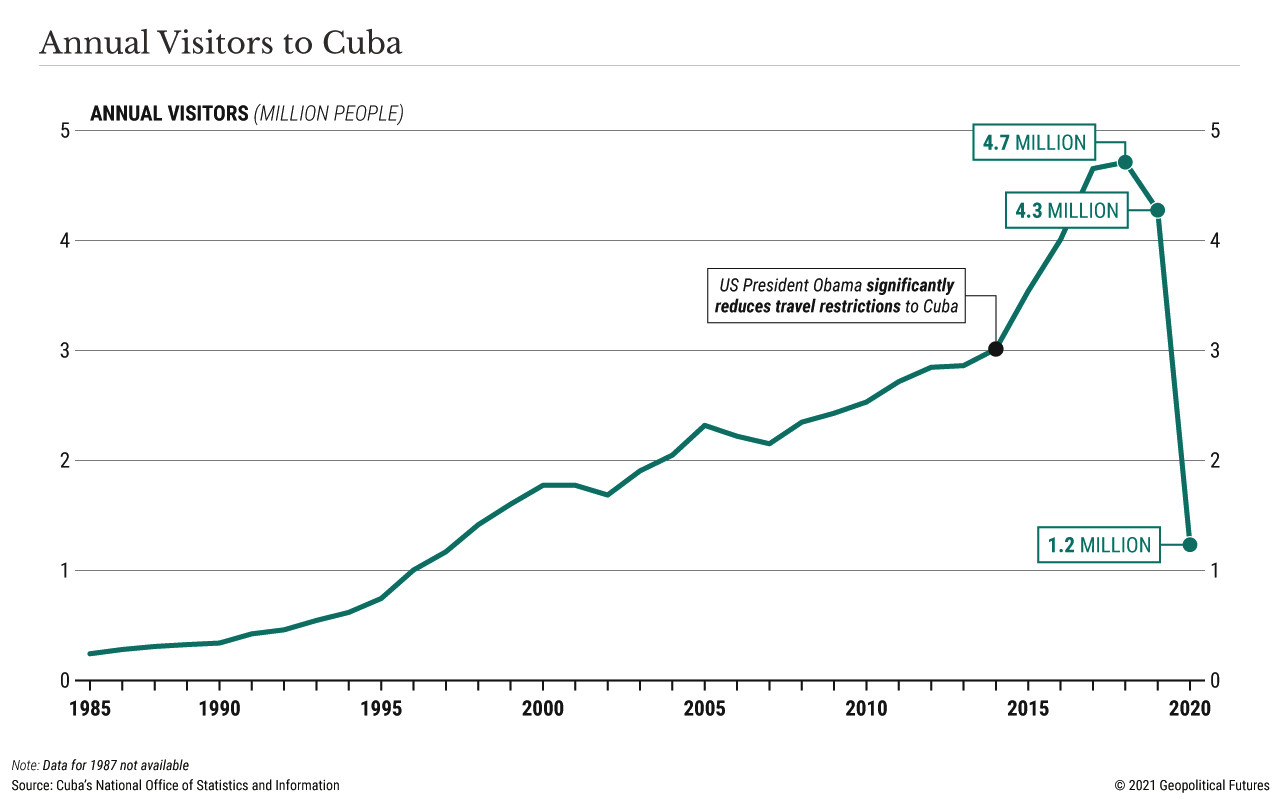 Of course, Cuba is no stranger to economic duress, food shortages and political opposition, but it looks like it’s reaching the point where it leads to political and geopolitical responses. Participants in the July 11 events have ties to the established political opposition groups N27 and the San Isidro movement. These two groups held small-scale anti-government demonstrations back in November 2020, when the San Isidro movement staged public hunger strikes and called for the government to loosen controls and end the imprisonment of political activists. The government placated them by offering to negotiate but did not make good on its promise. Inspired by San Isidro, N27 (or November 27) was established when a second public hunger strike attracted the support of 300 participants. By the end of the month, the Cuban government agreed to enter into talks with the protesters, which ultimately led nowhere. Over the course of 2021, the movement has heavily petitioned the U.S. government for support, engaged in more hunger strikes and worked to improve relations with international groups such as the Organization of American States and the International Court of Justice.

Social media posts reveal the links between the 2020 movements and the events of July 11. Many of the hashtags and handles used to organize and promote the July 11 protests, such as #SOSCuba, #PatriaYVida, #CubaLibre, @Mov_sanisidro and @CubaDecide, tie directly back to last year’s political movements. Moreover, local media reported that Luis Manuel Otero Alcantara, a leader of the San Isidro movement, was arrested. The size, scope and simultaneous occurrence of so many protests suggest with near certainty that they were coordinated. But the larger question is whether Washington played a part in them directly or indirectly, considering it has the most to gain from them. 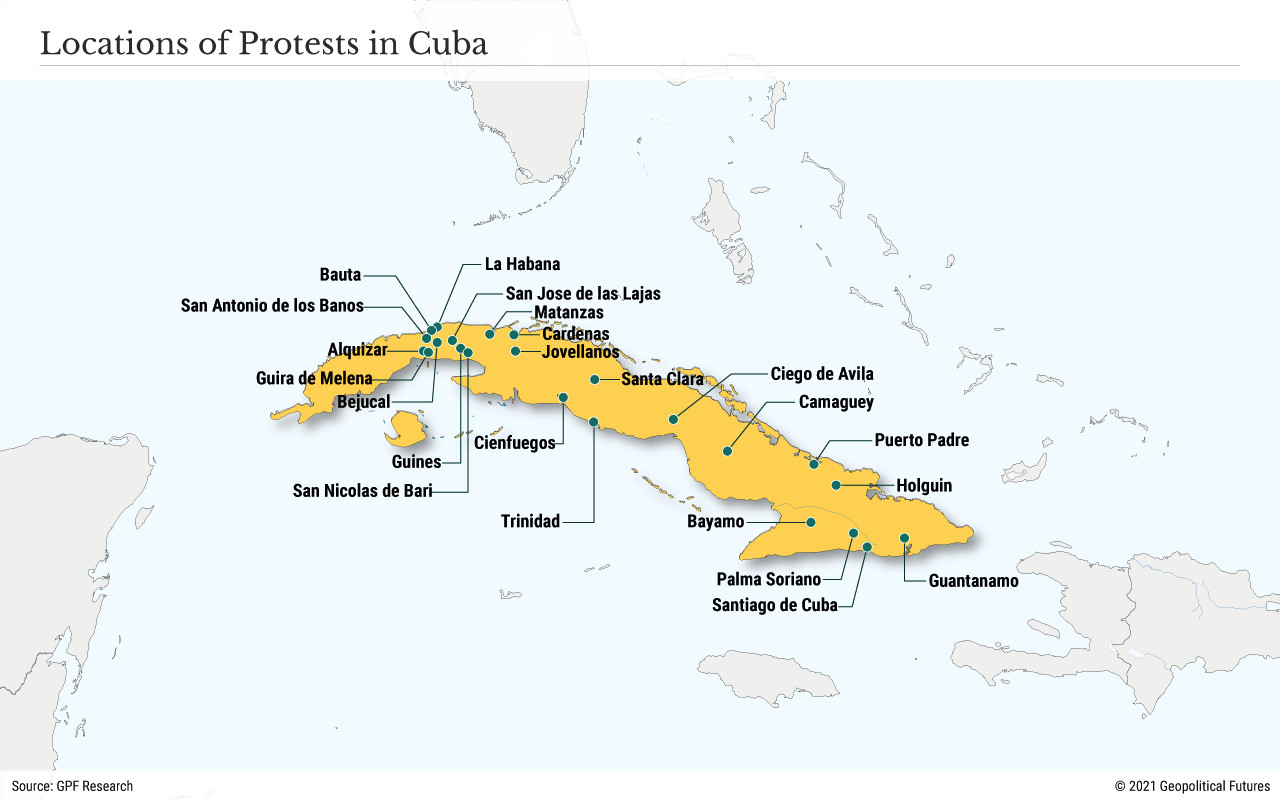 Havana, meanwhile, has stuck to the script. Within hours of the protests, the government deployed security forces to each location to quell the unrest, often with force. From the night of July 11 to the morning of July 12, security forces conducted a series of raids and detained those suspected of being behind the demonstrations. Havana also shut off electricity and the internet to stem the protests, while Diaz-Canel called up former President Raul Castro for a public show of unity and denounced the United States for interfering in Cuban affairs. (At the time of publication, there’s no evidence to suggest the U.S. was directly involved, but recall that Washington has a long history of Cuban interference.)

That leaves Russia and China, two candidates that could step in and help Cuba navigate its economic crisis. Both see value in keeping close ties with Cuba, an Achilles’ heel of Washington, but know that doing so would come at a political and economic cost that they may not be willing to pay.

The United States would like nothing more than to see regime change in Cuba. After all, that has been the precondition for lifting the blockade and thus for regaining its influence there. Putting political pressure on Havana, then, would also send China and Russia a message: If you want to keep your foothold in Cuba, it’ll cost you.