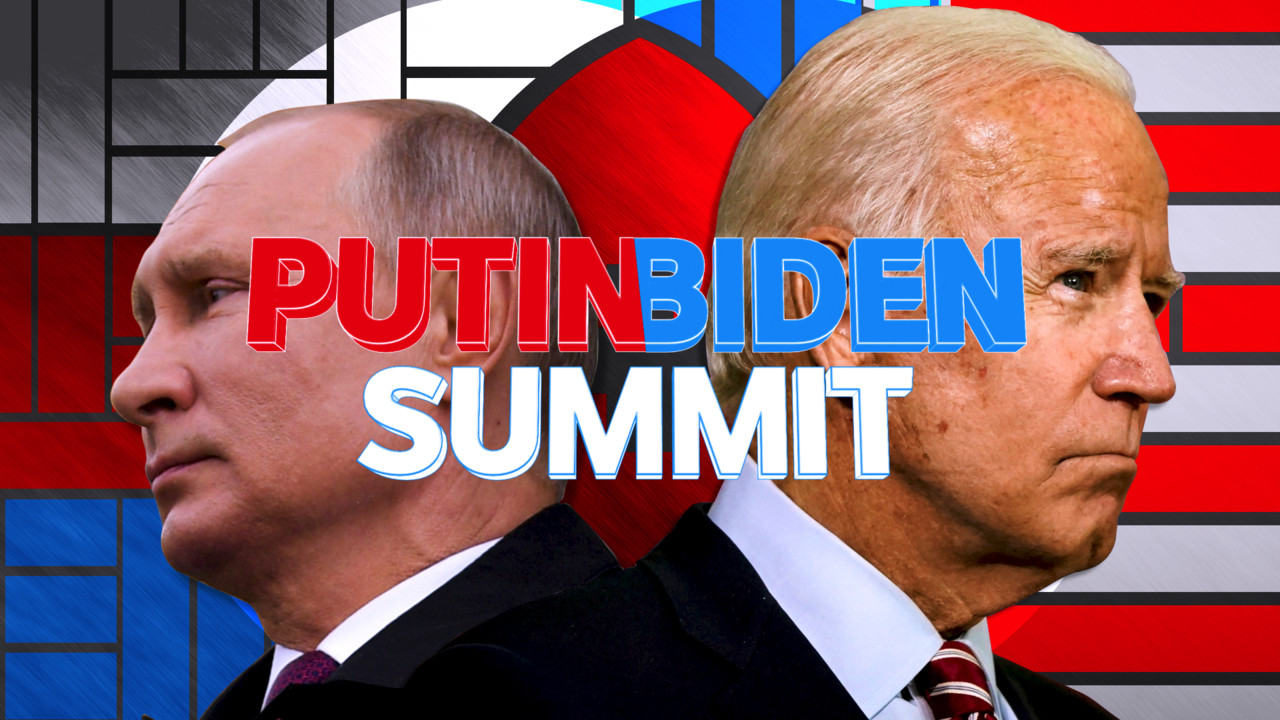 The much talked about the US-RF summit in Geneva came and went and yet no commentator so far has ventured to ask a very simple and very necessary question: What was Biden there to ask?

We know that the American side asked for this meeting while the Russians merely agreed, seeing in it a risk-free chance to clear the air and perhaps restore a modicum of international cooperation on key issues such as cybersecurity. Negotiating some major new agreement with the Americans was never the plan: the Russians have decided some time ago that the American side is nedogovorosposóbnaya—non-agreement-capable. If the Americans don't honor the treaties they have already signed, such as the intermediate-range missile treaty or the open skies treaty, what is the point of entering into more agreements with them—for them to also not honor?

On the other hand, a tête-à-tête with Putin was by no means a risk-free endeavor for Biden. The American body public has managed to paint itself into the corner of demanding that its president be "tough on Russia" "Nobody was tougher on Russia than me," quoth Trump recently from the sidelines. Indeed, right after his confab with Putin Biden found himself confronting screechy journalists declaring him at fault for not extracting a confession from Putin for things Putin hadn't done. There is an entire litany of nonsense that Biden was required to recite—the Skripal and Navalny attempted murder, election meddling, hacking attacks, etc.—all unproven and therefore all nonsense—and to all of them the Russians react with a typical Russian gesture of twisting their index fingers at their temples, indicating that the ones who spout such nonsense are non compos mentis. That was a no-win situation for Biden, and yet he took the risk. What for? What was the big prize for him?

One opinion that I have heard voiced is that, given the numerous irregularities during the presidential elections last November, Biden is a bit of a pretender. Indeed, only about half the Americans believe that his presidency is legitimate. And so, according to this theory, he came to Geneva as various Russian princes used to go to visit the Great Khan of the Golden Horde in order to legitimize their reign and receive an official document called, in a mixture of Mongol and Russian, yarlyk na knyazhenye. It was thought that Biden, by calling US and Russia "two great powers," meant to endow himself with the legitimacy he so sorely lacks. But this theory goes against two basic facts: first, Americans, in the main, neither know nor care what the rest of the world thinks; second, Putin has been so vilified in the American mass media that in the public perception he is the enemy rather than the world's other great leader, and no legitimacy can be gained by meeting with him.

In addition to to the basic fact that the Americans asked for the meeting and the Russians magnanimously agreed to it, there is the unmistakable clue of body language. Behold the initial greeting: Putin is dignified and pacific while Biden is bowing and sporting a goofy grin in a clear show of subservience. 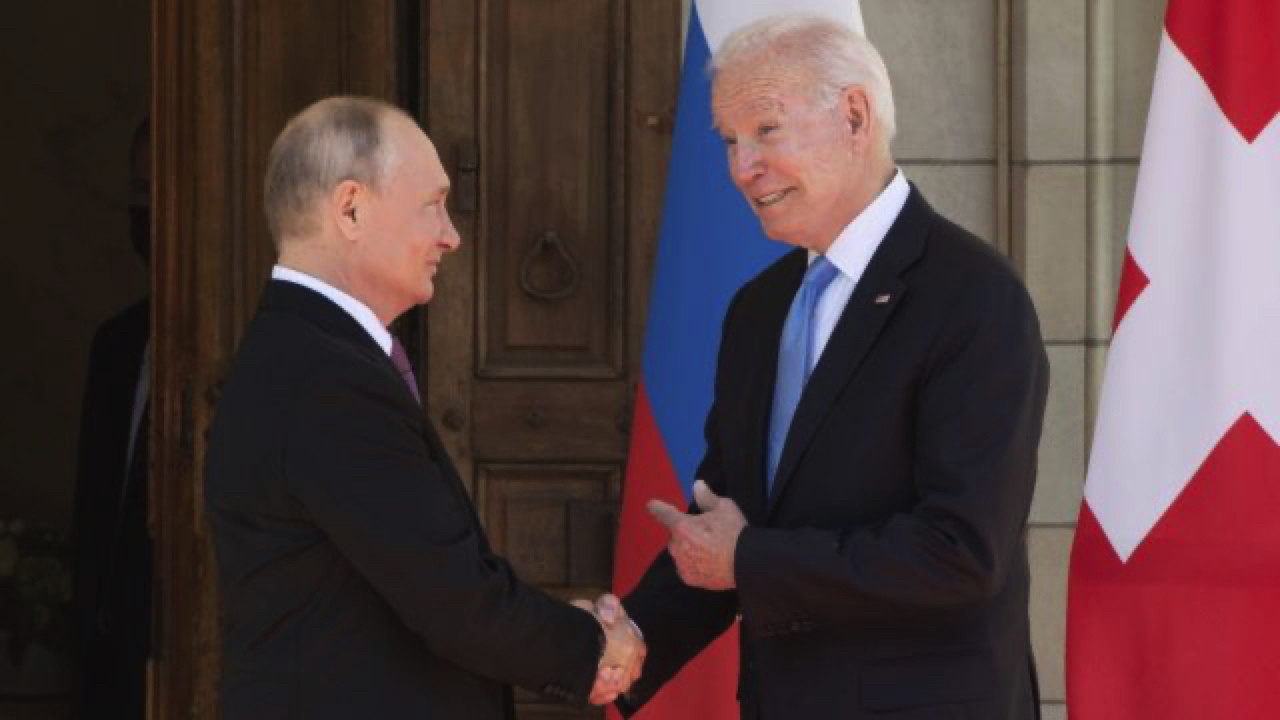 Seated together for the cameras, Putin is exuding self-confidence and calm and manspreading while patting his knee—"Come and sit here, little boy!" while Biden's legs are crossed, demure and ladylike, guarding his family jewels, his feet pointed at Putin, his facial expression uncertain. 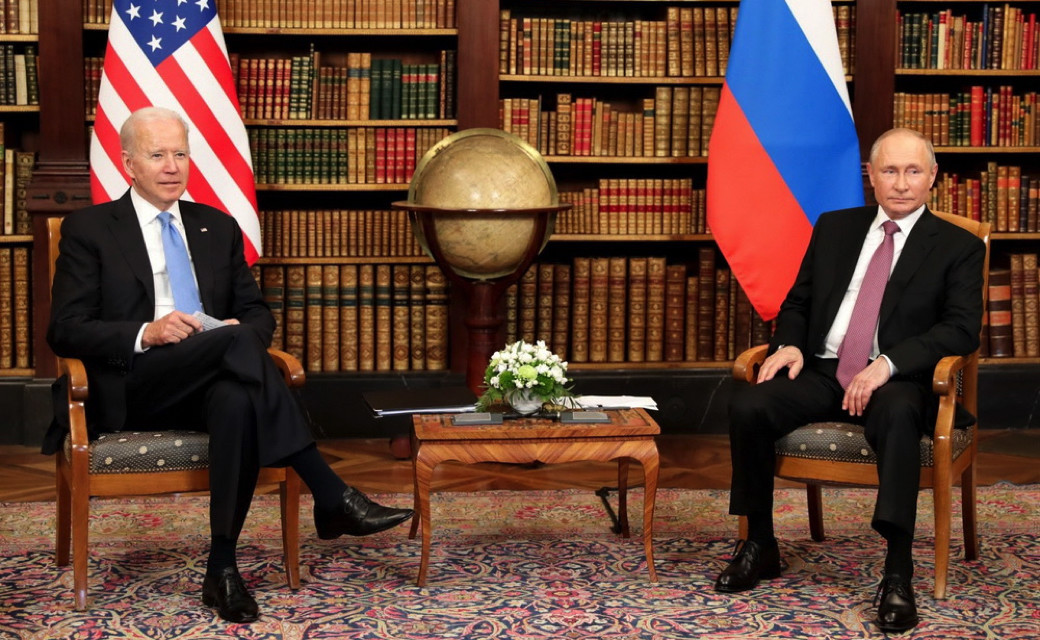 Putin and Biden seated
What is the future of a cyber detente after Biden and Putin’s Geneva summit?

One could be forgiven for thinking that this is the Mickeymousearch of Disneylandia all aquiver at having been granted an audience by the Great Khan of Eurasia!

A great many theories have advanced to explain Biden's motivation, from Biden trying to rally the West by presenting a unified front against Russia to Biden trying to drive a wedge between Russia and China, plus lots of others—all but the most obvious.

It is common knowledge that the ability of the US to continue as a going concern critically depends on its ability to import products in exchange for dollars it can simply print into existence as needed. The reason these worthless dollars are still honored hinges on the dollar's status as a reserve currency—lessened but still significant. And the dollar's status as a reserve currency in turn has much to do with the petrodollar system and the fact that oil-importing countries around the world need to earn or borrow dollars in order to buy oil while oil-exporting countries need to accept dollars as payment even if this is to their economic detriment. Knock out the petrodollar, and the standard of living of the average American plummets by a factor of 10. This is the eventuality which Biden took upon himself to defer by meeting with Putin.

There have been three attempts by oil-exporting nations to stop selling their oil for dollars: by Iraq, Libya and now by Russia. Speaking at the recent St. Petersburg World Economic Forum, Putin, as usual, put it ever so politely and obliquely. Referring to the effect of US sanctions, he said that the US is "sawing through the branch on which it is sitting" and "will eventually tumble." To put some urgency behind the word "eventually," Russian finance minister Anton Siluanov stated that Russia will zero out the dollar portion of its sovereign wealth fund within a month.

"We are not moving away [from the dollar] voluntarily, we are being forced to do it. But when we do so, a certain system of international relations with our partners takes shape—outside the dollar zone."

We know what happened to Iraq and Libya: they got bombed halfway to oblivion. But no such option exists with regard to Russia when it announces that it is moving away from the dollar both as a reserve currency and in international trade. Instead of bombing, the US is reduced to begging, and that is what Biden came to Geneva to do. He was forced to beg rather than bargain or deal because he had nothing to offer to Russia and because the Russians have no reason to trust him to make deals. Well, not quite nothing: Biden could still offer to do nothing, or as close to nothing as possible—that being something that his administration is still ostensibly capable of delivering.

Biden can't stop anti-Russian sanctions that have already been written into law, but he can force his administration to drag its feet on implementing them and to make their implementation as meaningless and toothless as possible. For instance, he can resort ot sanctioning dead Russians and bankrupt Russian companies. And Biden can't stop the Russophobic rhetoric in the US media and in US Congress, but he can make sure that there is no follow-through from words to actions. Specifically, the US can offer to stop interfering with European efforts to secure access to Russian natural gas, which is becoming critical to European energy security because it is the only fuel that is flexible enough to compensate for the raggedness of electricity output from wind and solar installations.

From the way the Geneva meeting resonated throughout Europe, the effects of this grand bargain are already being felt. Nord Stream 2—delayed but not stopped by US sanctions—is moving ahead. As it promised, Russia will continue to rent capacity on the Ukrainian gas transit pipeline, but at a level that won't even pay for its maintenance. Pointedly, the über-Russophobic Ukraine was not even a topic of discussion at the Geneva summit. In accordance with Oscar Wilde's saying that "There is only one thing in life worse than being talked about, and that is not being talked about," this has caused much hand-wringing in Kiev. The arch-Russophobic Poland, which was one of the main obstructionists of the Nord Stream 2 pipeline within the EU, will now be forced to buy Russian natural gas, either indirectly from Germany via Nord Stream 2 or directly through an LNG terminal they built for American gas from fracking—which, as it turns out, doesn't exist in anything like the necessary volumes. And silly little Lithuania, ever so eager to be rid of all things Russian, will now have to import Russian gas through Germany and Poland, paying transit fees at each step.

As I have said before, Russophobia is expensive: those who engage in it fail to secure the loyal customer discount. The Eastern Europeans who thought that they had a bright future playing Uncle Sam's Russophobic lapdogs have brought this lesson upon themselves in the harshest and most painful way possible. America is leaving Eurasia. Say what you will about Biden, but I am pretty sure that he is cognizant of this fact and that he came to Geneva in an attempt to gain some advantage by offering to leave Eurasia voluntarily.

Note
The second and third images correspond to the same Summit moments as those in Dmitry Orlov's article but they are not the same ones. The first has no correspondent in the article.