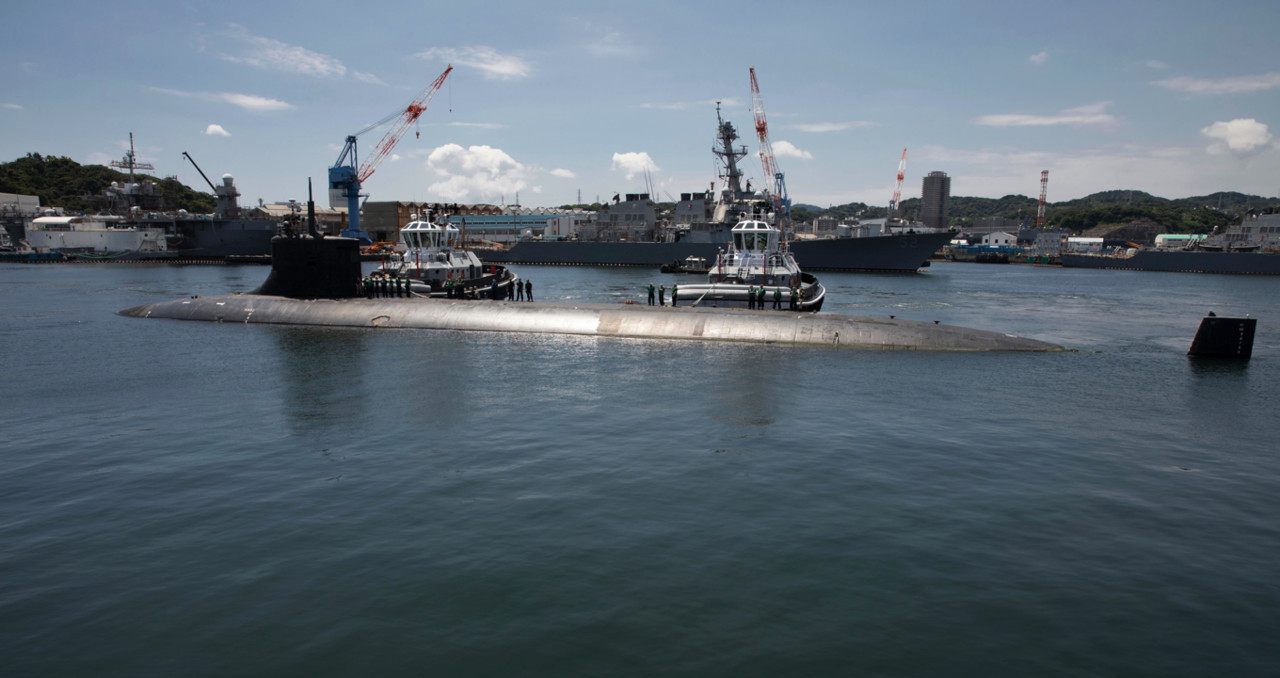 A Wake-up Call for East Asia – and the World 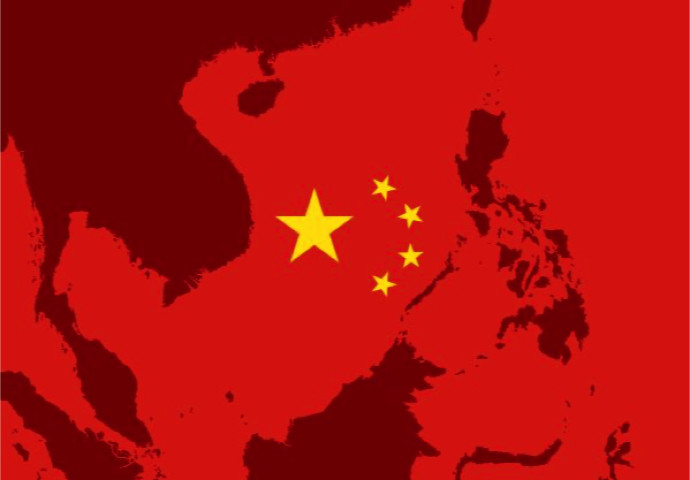 When elephants fight, it is the grass that gets trampled.

So warned Philippines President Rodrigo Duterte in his address to the UN General Assembly on September 22, 2020. He was referring to the consequences for East Asia of a conflict between the US and China.

Fast forward to October 2, 2021, about one year later, and the first patch of grass has been stomped on by the U.S. elephant, trudging stealthily about, far from home in the South China Sea. On that day the nuclear-powered attack submarine, the USS Connecticut, suffered serious damage in an undersea incident which the U.S. Navy ascribed to a collision with an undersea object.

After sustaining damage, the submarine apparently surfaced close to the Paracel Islands which lie only 150 nautical miles from China’s Yulin submarine base in Hainan Province. The Connecticut is one of only three Seawolf class of submarines, which are assumed to be on spying missions. But they can be equipped with Intermediate Range (1250-2500 km) Tomahawk cruise missiles which can be armed with nuclear warheads. It is claimed that they are not so equipped at present because the Navy’s “policy decisions” have “phased out” their nuclear role, according to the hawkish Center For Strategic and International Studies.

When a US nuclear submarine with such capabilities has a collision capable of killing U.S. sailors and spilling radioactive materials in the South China Sea, it should be front page news on every outlet in the U.S. This has not been the case – far from it. For example, to this day (October 30), nearly a month after the collision, the New York Times, the closest approximation to a mouthpiece for the American foreign policy elite, has carried no major story on the incident and in fact no story at all so far as I and several daily readers can find. This news is apparently not fit to print in the Times. (A notable exception to this conformity and one worth consulting has been Craig Hooper of Forbes.)

A blackout of this kind will come as no surprise to those who have covered the plight of Julian Assange or the US invasion of Syria or the barely hidden hand of the United States in various regime change operations, to cite a few examples

The U.S. media has followed the narrative of the U.S. Navy which waited until October 7 to acknowledge the incident, with the following extraordinarily curt press release (I have edited it with strike-outs and italicized substitutions to make its meaning clear.):

The Seawolf-class fast-attack submarine USS Connecticut (SSN 22) struck an object while submerged on the afternoon of Oct. 2, while operating in the South China Sea near or inside Chinese territorial waters. Thecrew is being held incommunicado for an indefinite period. This allows the extent of injuries to the crew to be kept secret.

The submarine remains hidden from public view to conceal the damage and its cause. USS Connecticut’s nuclear propulsion plant and spaces are in a condition that is being hidden from the public until cosmetic repairs can be done to conceal the damage. The extent of damage to the remainder of the submarine is also being concealed. The U.S. Navy will not allow an independent inspection or investigation. The cover-up will continue.

Tan Kefei, spokesperson for China’s Ministry of National Defense although not so terse, had much the same to say as my edited version above, as reported in China’s Global Times:

“It took the US Navy five days after the accident took place to make a short and unclear statement. Such an irresponsible approach, cover-up (and) lack of transparency .. can easily lead to misunderstandings and misjudgments. China and the neighboring countries in the South China Sea have to question the truth of the incident and the intentions behind it.

But Tan went further and echoed the sentiment of President Duterte;

“This incident also shows that the recent establishment of a trilateral security partnership between the US, UK and Australia (AUKUS) to carry out nuclear submarine cooperation has brought a huge risk of nuclear proliferation, seriously violated the spirit of the Non-Proliferation Treaty, undermined the construction of a nuclear-free zone in Southeast Asia, and brought severe challenges to regional peace and security.

“We believe that the actions of the US will affect the safety of navigation in the South China Sea, arouse serious concerns and unrest among the countries in the region, and pose a serious threat and a major risk to regional peace and stability.”

The crash of the USS Connecticut goes beyond the potential for harmful radioactive leakage into the South China Sea, with potential damage to the surrounding nations including the fishing grounds of importance to the economy. If the US continues to ramp up confrontation far from its home in the South China Sea, then a zone of conflict could spread to include all of East Asia. Will this in any way benefit the region? Does the region want to be turned into the same wreckage that the Middle East and North Africa are now after decades of US crusading for “democracy and liberty” there via bombs, sanctions and regime change operations? That would be a tragic turn for the world’s most economically dynamic region. Do the people of the region not realize this? If not, the USS Connecticut should be a wake-up call.

But the people of the US should also think carefully about what is happening. Perhaps the foreign policy elite of the US think it can revisit the U.S. strategy in WWII with devastation visited upon Eurasia leaving the US as the only industrial power standing above the wreckage. Such are the benefits of an island nation. But in the age of intercontinental weapons, could the US homeland expect to escape unscathed from such a conflict as it did in WWII? The knot is being tied, as Khrushchev wrote to Kennedy at the time of the Cuban Missile Crisis, and if it is tied too tightly, then no one will be able to untie it. The US is tying the knot far from its home this time half way around the world. It should not tie that knot too tight. 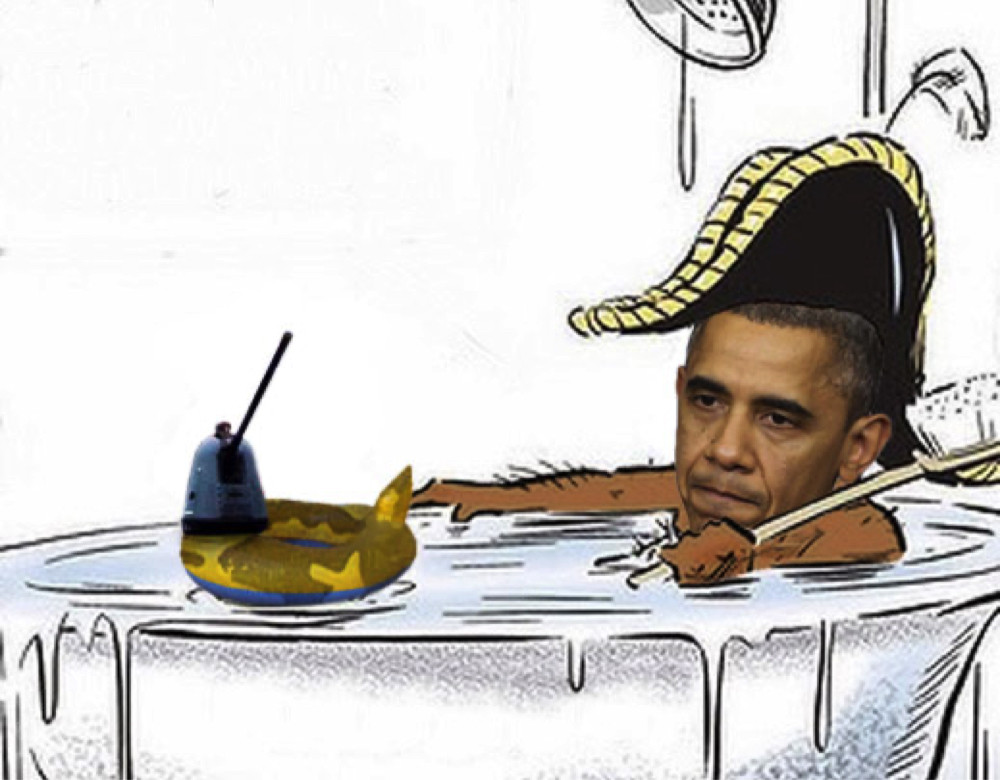 What spooked the USS Donald Cook so much in the Black Sea?

I heard it hit an undersea cliff.

Please forgive me if my words betray my frustration. That is because I have been saying the same thing for years and it seems to me that almost no-one has “connected the dots.”

As many of us know, the nuclear armed nations of the world agreed decades ago that no one nation would initiate a nuclear first strike against another nation, because they realized that the consequence of such an action would be the end of human life on earth. That realization cooled the nuclear arms race down to everyone’s relief.

Then in the first week of April, 2014, the President of the United States, Barrack Obama, announced publicly that the nuclear weapons strategy of the US has changed: the US is now willing to make a first strike on China with nuclear weapons.

Needless to say that public statement freaked out 1 – 2 billion Chinese people around the globe. Understandably, the President of the Republic of China, Xi Jinping, announced publicly that he ordered China’s nuclear armed submarine fleet to go immediately to the US west coast. He also reassured the Chinese people that Chinese intercontinental ballistic missiles could travel over the North Pole and destroy major cities and other targets in the eastern US.

One or two days later a Chinese envoy arrived at the Kremlin in the Federation of Russia with an envelope for Vladimir Putin, President of the Federation of Russia. The contents of the envelope initiated Article 9 of the Treaty of Good-Neighborliness and Friendly Cooperation Between the People’s Republic of China and the Russian Federation. Article 9 states: “When a situation arises in which one of the contracting parties deems that peace is being threatened and undermined or its security interests are involved or when it is confronted with the threat of aggression, the contracting parties shall immediately hold contacts and consultations in order to eliminate such threats.”

Let us stop for a moment and recap the events. The President of the US declared publicly that the US was willing to conduct a nuclear first strike on China. The Chinese people freaked out. The president of China took defensive measures including asking Russia for help with this unforeseen mess. (Sorry, I’m going to have to make this post into two parts.)

The Russians responded, as they must and feel obligated to do after they make an agreement with China. After all, the Russians are “agreement capable.”

The Russian move was truly brilliant. Enter the USS Donald Cook incident. (DC for short) The videos of the DC incident were so widespread, and so many people made copies of the video that “they” could not possibly scrub the video off the Internet. However, they are trying to change the date of the incident.

Anyway, a day or two after the Chinese envoy arrived at the Kremlin and invoked Article 9 of the aforementioned Treaty, the Russians made a move.

The USS Donald Cook is the most advanced Aegis class missile destroyers in the US navy. The DC was in the Black Sea at this time and the Russians make their move. Two Russian fighter jets approached the DC; one with advanced electronic warfare hardware, and one as an escort. The DC electronics, computers, radar, and all electronics crashed, leaving the DC “dead in the water.” Then the Russian jet escort made twelve mock attack runs on the DC. And you probably already know about the Russian helicopter crew videotaping the commotion onboard the DC.