Afghanistan Geopolitics and the Taliban 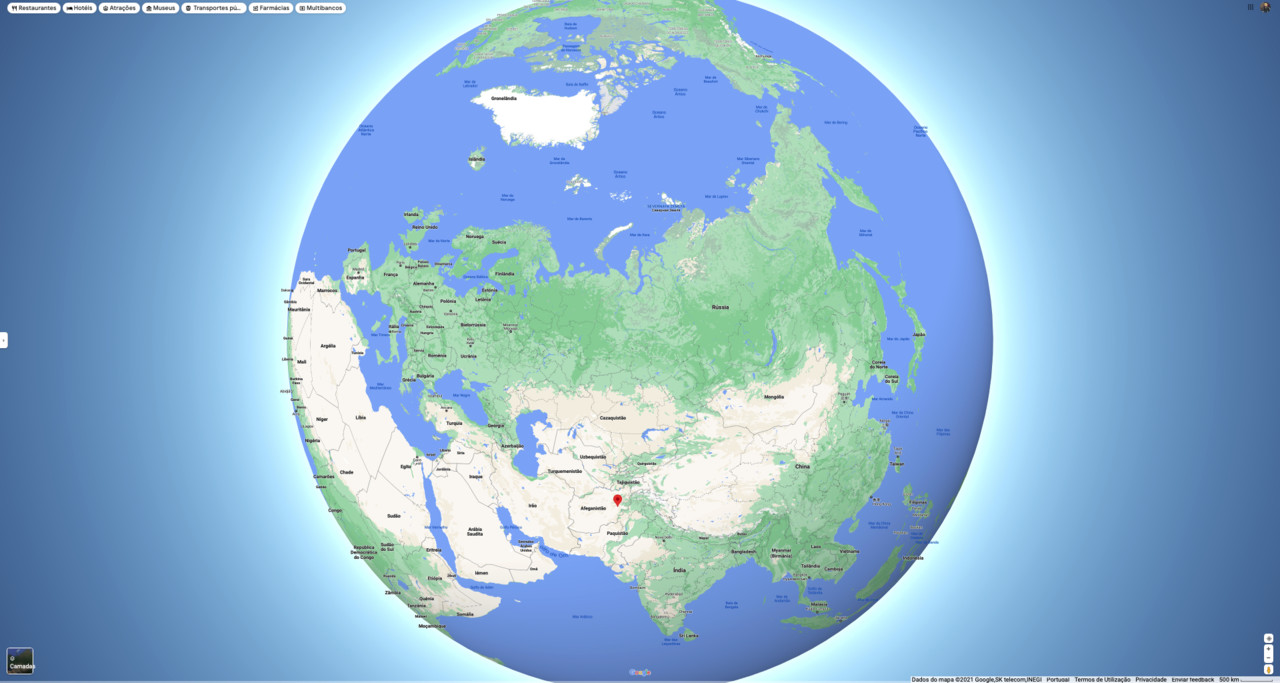 As the Taliban once again transition from an insurgency to a political institution, questions surround the kind of government they want to be. Domestic policies are one thing; the nature of their foreign policy, if they even decide to have one, is quite another. Will they, for example, join the regional system of Central Asian autarkies, or become a base for Islamic radicalism worldwide? Either answer will have major implications for regional powerbrokers like Russia, China and, to a lesser extent, India and Turkey. These countries have an interest in maintaining ties to a Taliban government even as they have serious concerns about what an empowered Taliban might mean for their own territories.

The Taliban and the Islamic State

It’s well known that Taliban leader Mullah Mohammed Omar ruled Afghanistan in accordance with Shariah prior to the 2001 invasion, but it’s important to remember that Afghanistan at this time was an Islamic state, not the Islamic State. The Taliban never extended their banner much beyond their borders, but it wasn’t for lack of trying. In 1998, Omar said the goal of his movement was, “To end the mischief in the country, to establish peace and security, to protect life, wealth and honor and to enforce the Sharia, do jihad against the leaders who were devoted for power, and endeavor to make the land of Afghanistan an exemplary state.” As an experiment in transnational jihadism, Afghanistan may have failed, but it did become one of the premier havens for terrorist groups throughout the world.

Fast forward to the mid-2010s, when the Islamic State exploded onto the scene in Iraq. Plenty of other Islamist groups existed before it – al-Qaida, Hamas, the Muslim Brotherhood, the Taliban, Hezbollah, Palestinian Islamic Jihad, Egyptian Islamic Jihad, Boko Haram, Hizb ut-Tahrir and the Caucasus Emirate, just to name a few – but none was as systemic a threat as IS. For the other groups, the caliphate was a secondary concern, not because they didn’t want one but because they believed the historical conditions weren’t quite ripe yet. Moreover, many of these groups were formed with geographic and ethnic bases and as such were either less suited or less immediately interested in global dominance. As an extra-ethnic and extra-territorial entity, IS was different and, to those at risk of its attacks, scarier. Now that the Taliban is back in power, groups operating in Afghanistan, such as Islamic State-Khorasan, are reviving those fears. 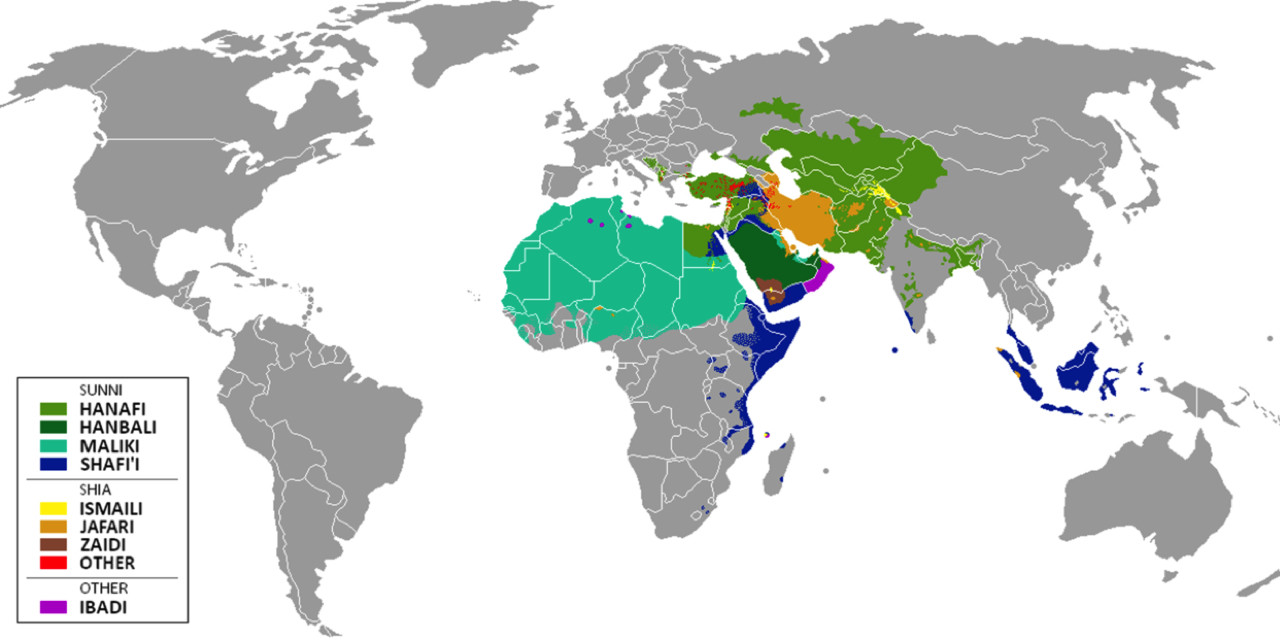 Some regions have a dominant or official madhhab; others recognize a variety.

However, those fears may be a little misplaced. Ties between the Taliban and the Islamic State were icy from the beginning. The Taliban always saw IS as an alien presence in the country and thus as a political opponent, and their ideological differences are such that the Hanafi principles of Islam practiced by the Taliban are considered heretical by the Salafists of IS and other pan-Islamist organizations. Moreover, it’s important for the Taliban to achieve some degree of normalization and stability. That very well may include a readiness to fight IS for what took 20 years to retake.

The new Taliban government thus faces two challenges. The first is to gain international recognition and legitimacy such that they can govern, trade, acquire investment and participate in the global system (if they want to). The second is to prevent extremist groups or other rebels from challenging their rule. What complicates things further is that IS-K sees itself as a constituent part of a future caliphate, and much of its leadership were former Taliban fighters. In other words, some factions from the Taliban share the Islamic State’s global revolutionary agenda and so may be less inclined to building a nation-state.

Like it or not, these challenges may be easier to manage with international recognition and backing. Eurasian powers such as Russia, China, Turkey, Iran and the European Union may well back the Taliban if they believe the group can be trusted to at least maintain stability again, especially if stability can be used as a bulwark again the Islamic State.

It wasn’t easy to defeat the Islamic State, but it wasn’t hard to assemble a coalition against it. When it came to power in Iraq, it was close to strategically important places such as Turkey, the North Caucasus, the Balkans and the EU. It was also an existential threat to regional Arab monarchies.

Rightly or wrongly, Afghanistan is less urgent. No one is going to cobble together an international military force to protect or oust the Taliban at this point. But necessity often dictates behavior, and if international powers believe IS to be a more dire threat than the Taliban, they may tacitly endorse the Taliban even if they don’t directly, materially support them.

Each of the major powers in Eurasia has its own set of concerns when it comes to Afghanistan and the Taliban’s resurgence. Let’s begin with Russia. Moscow has a long history of confronting Islamic extremism in the North Caucasus, especially in the restive regions of Chechnya and Dagestan. Throughout the 1990s, it faced significant levels of resistance from non-Slavic Muslim populations there, and the Kremlin even launched a full-fledged war against the Chechens and other groups in the region. 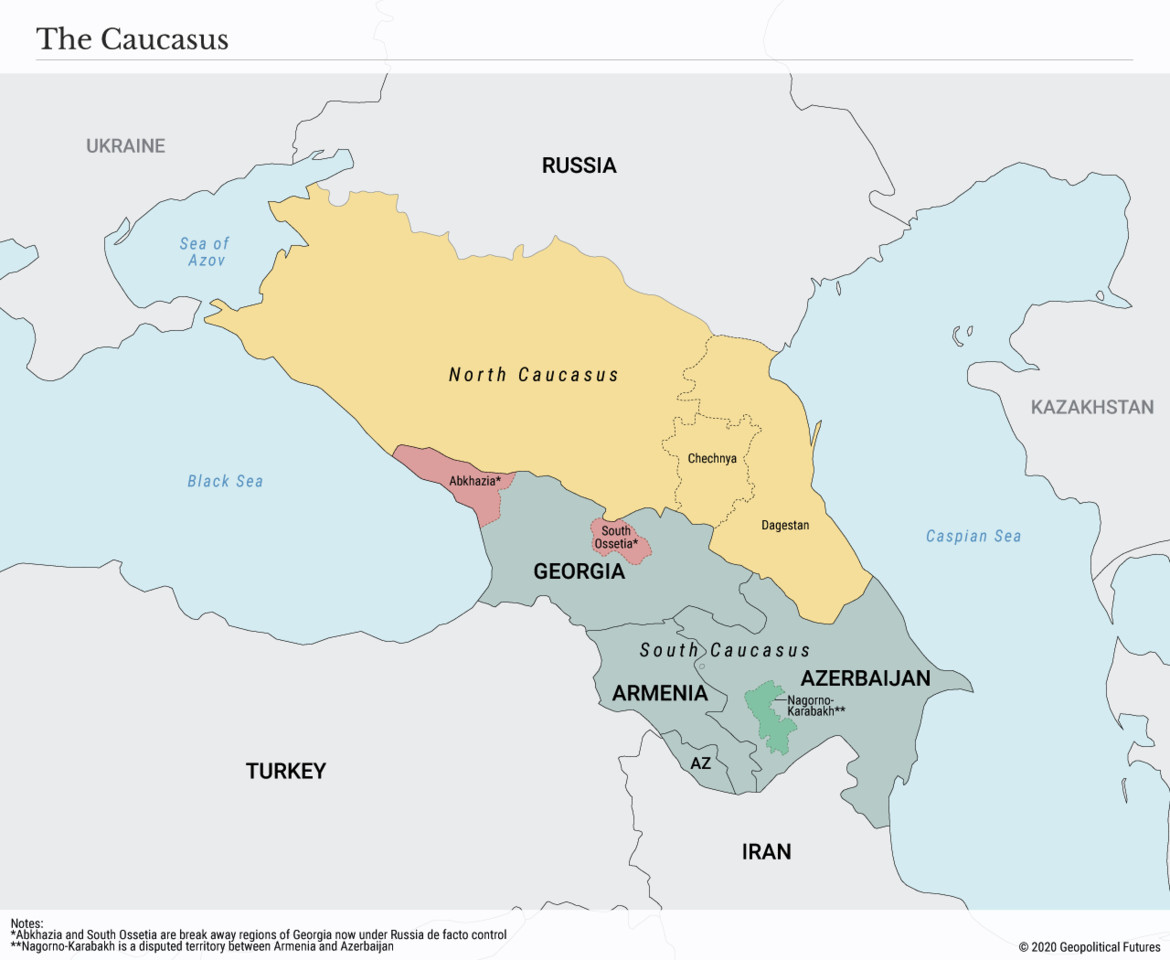 To the east of the North Caucasus, Moscow still has significant influence in the former Soviet states of Central Asia. These countries themselves experienced a struggle between secularist and Islamic extremist forces two decades ago, as newly independent nations. Today, they also have an impact on what happens in Russia, especially considering that millions of migrants from Central Asia and Russians with Central Asian heritage live in Russia. Given that three Central Asian states share borders with Afghanistan, Moscow is concerned that the instability there could spill over into Central Asia and then spread into the North Caucasus. 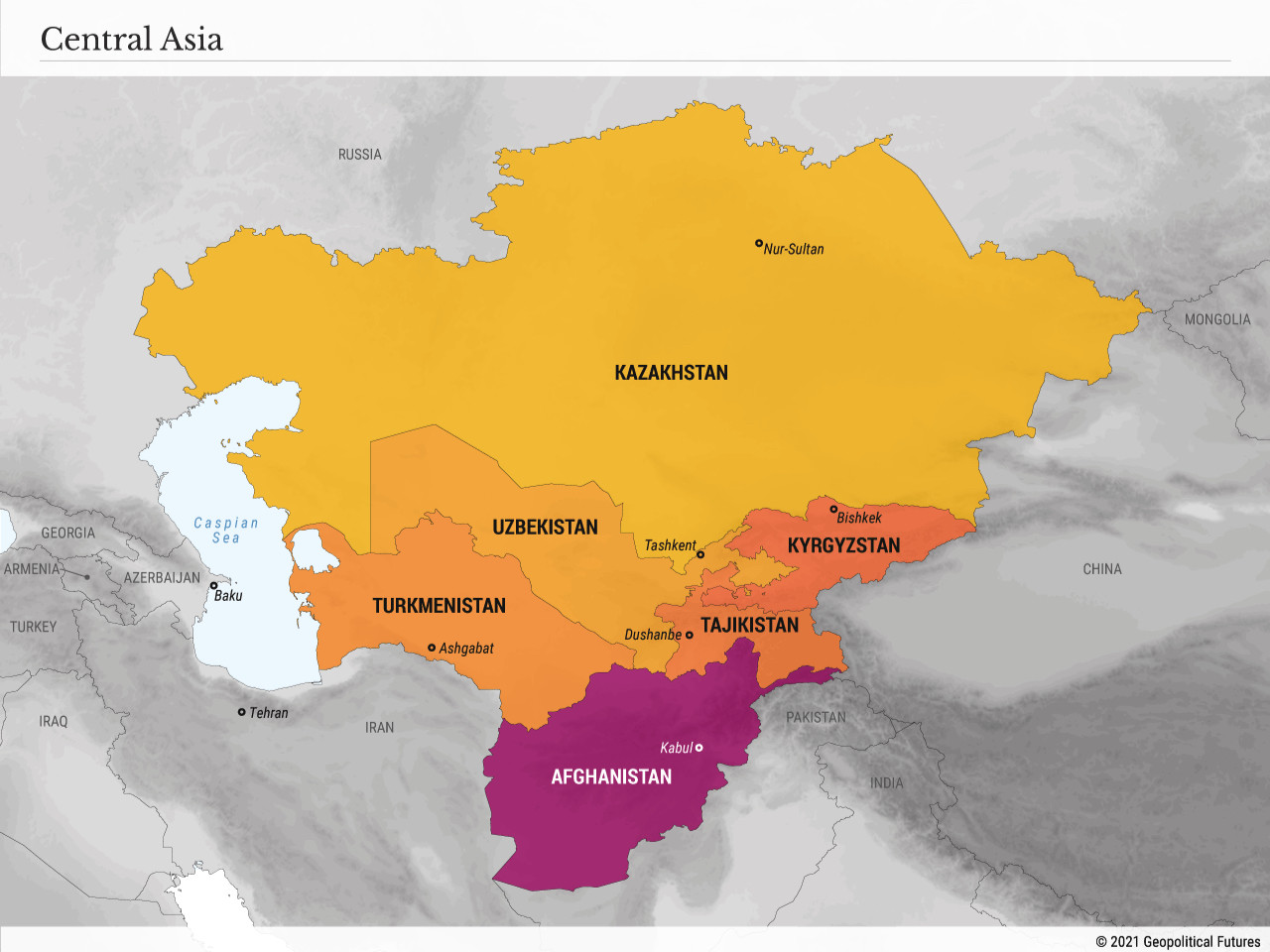 Indeed, the profile of terrorists in Russia has changed over the past few years. Terrorists of Central Asian descent have increased in number compared to those originating from the North Caucasus. The Islamic State is also increasingly influential among these groups. According to Russia’s FSB security services, in 2015, 20 percent of the Muslim population in the Far East region of Khabarovsk, mostly consisting of immigrants, shared the views and vision of the Islamic State. Rising tensions between ethnic Russians and immigrants from Central Asia in major Russian cities have also led to further isolation and radicalization of these groups in recent years. For Moscow, therefore, it’s crucial that secular regimes remain in power in Central Asia. These regimes themselves became increasingly concerned with the situation in Afghanistan as the government in Kabul began to crumble. The Russian-led Collective Security Treaty Organization, which has among its members three Central Asian states, launched large-scale exercises in Tajikistan near the Afghan border in recent weeks.

Russia and Central Asian states also closely coordinated their responses with China, whose own concerns about Afghanistan relate to its Uyghur population. The mostly Muslim Uyghurs are concentrated in China’s eastern province of Xinjiang, which gives Beijing an advantage over a place like Russia, where the Muslim population is scattered throughout the country. Still, Xinjiang is linked to Afghanistan through the Wakhan Corridor, meaning extremist elements there still present a danger to Beijing.

India and Pakistan’s concerns about the Taliban’s resurgence relate to the disputed region of Kashmir. Pakistan has drawn criticism from India for its long-standing support for the Taliban and related militant groups. The Taliban’s rise to power strengthened Pakistan’s position in the region and made India hyper-vigilant about an increase in anti-government activity in Muslim-dominated Kashmir. Thus, extremist activity there has the potential to draw Pakistan and India into direct confrontation. Pakistan also has close ties to China, which has territorial disputes with India in the Laddakh region, east of Kashmir. India must therefore consider China’s potential response to any moves it makes against Pakistan. 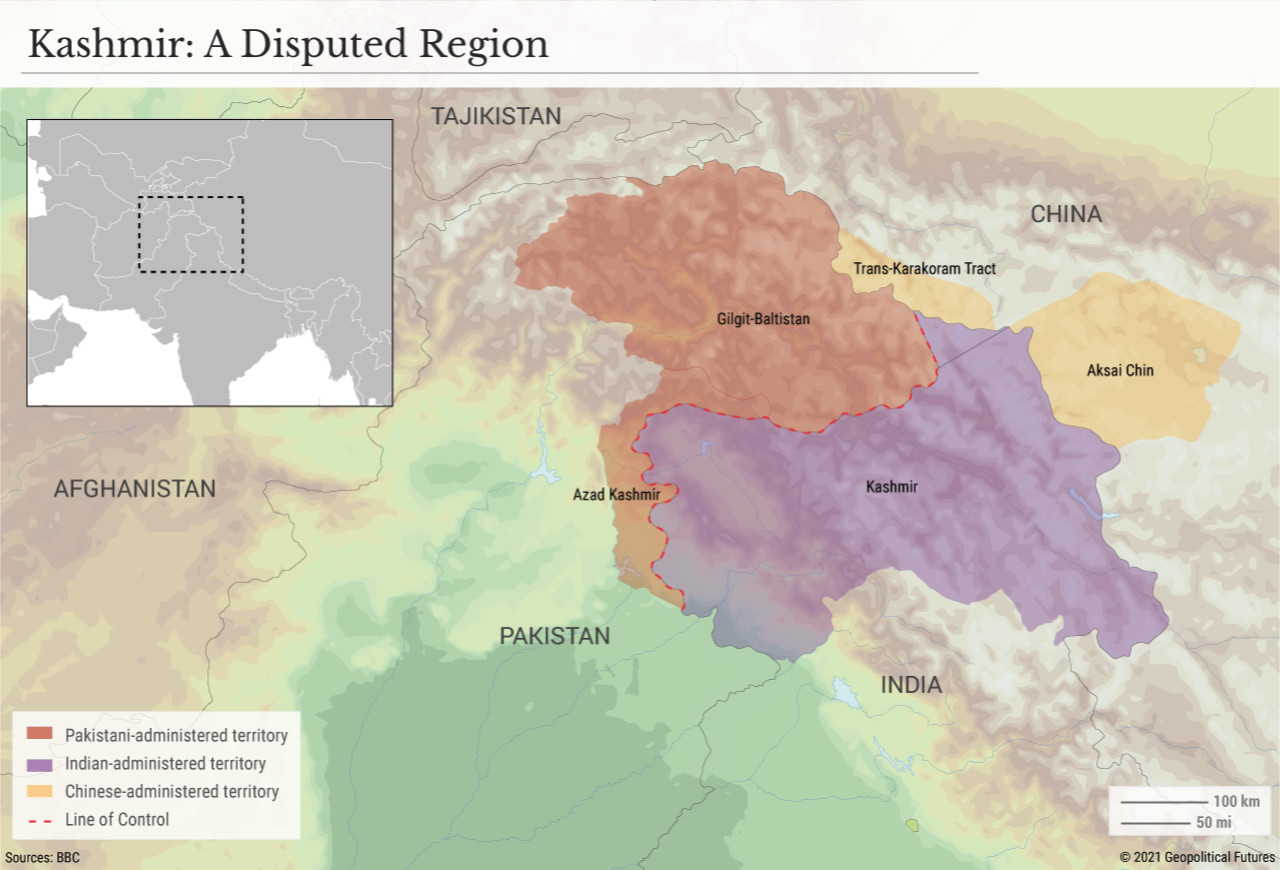 Turkey is not as well-positioned to act in Afghanistan as the other Eurasian countries, but it has made moves to remain active in the political and diplomatic realms. Ankara is trying to expand its influence in Central Asia through economic investments and by leveraging its cultural ties to other Turkic nations in the region. Its worry in Afghanistan is the potential for extremists to reignite problems closer to home. Hizb ut-Tahrir, a transnational group that aims to establish a global caliphate, is of particular concern because of its attempts to unite the Turkic peoples of Central Asia.

The Eurasian powers have adopted a mostly wait-and-see approach to the Taliban for now. Despite the Taliban declaring the country the Islamic Emirate of Afghanistan, the international community isn’t like to unite a fighting force against it. The coalition against IS was formed not only because of the group’s threat as a terrorist organization but also because the West, Eurasian powers, and secular and moderate Muslim regimes in the Middle East wanted to quash a movement that presented the first serious claim to caliphate status since the Ottoman Empire. But the Taliban are different. Their Islamic revolution is confined to Afghanistan.