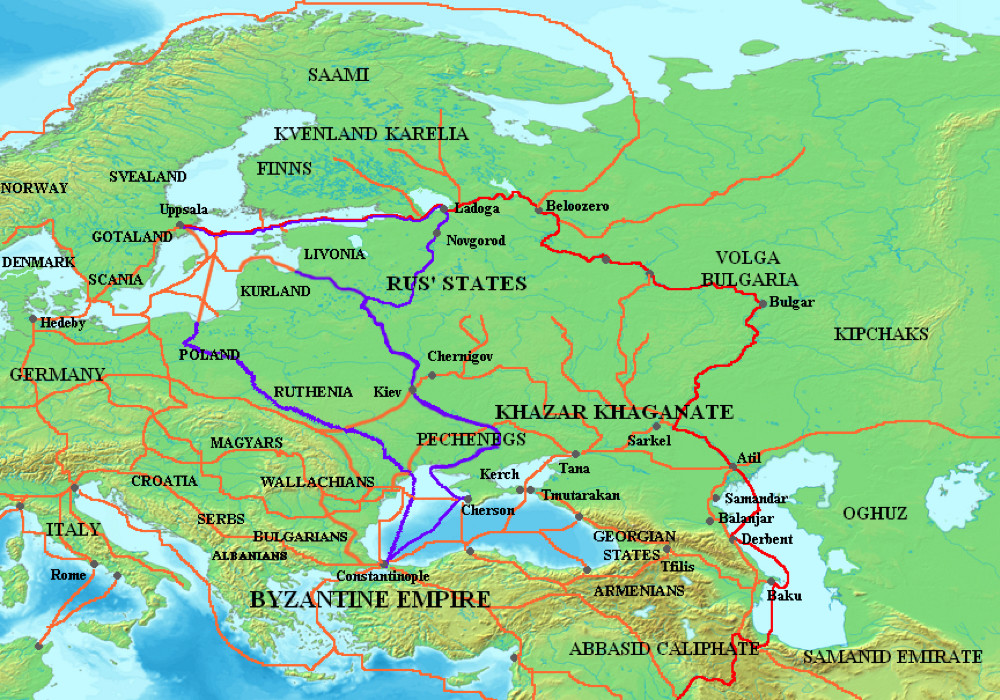 Map showing the major Varangian trade routes, the Volga trade route (in red) and the Trade Route from the Varangians to the Greeks (in purple). Other trade routes of the 8th–11th centuries shown in orange.

The History of Russia begins with the histories of the East Slavs.

The traditional start-date of specifically Russian history is the establishment of the Rus’ state in the north in 862, ruled by Varangians. Staraya Ladoga and Novgorod became the first major cities of the new union of immigrants from Scandinavia with the Slavs and Finns. In 882 Prince Oleg of Novgorod seized Kiev, thereby uniting the northern and southern lands of the Eastern Slavs under one authority.

The state adopted Christianity from the Byzantine Empire in 988, beginning the synthesis of Byzantine and Slavic cultures that defined Russian culture for the next millennium. Kievan Rus’ ultimately disintegrated as a state due to the Mongol invasions in 1237–1240 along with the resulting deaths of significant numbers of the population.

The Origins of Russia - Summary on a Map
In this first part (1/3), let’s retrace on maps the first origins of Russia, from the creation of Novgorod during the 10th century, until the end of the Time of Troubles and the beginning of the Romanov dynasty.